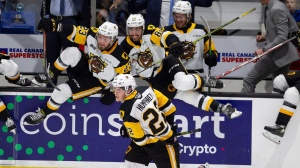 SAINT JOHN, N.B. - Jan Mysak scored 10:08 into overtime Monday as the Hamilton Bulldogs clinched a berth in Wednesday's Memorial Cup final with a 4-3 victory over the Shawinigan Cataractes at TD Station in Saint John, New Brunswick.

The dramatic semifinal win propels the Bulldogs into the championship game against the host Saint John Sea Dogs.

Artem Grushnikov, Mason McTavish and Logan Morrison scored in regulation for the Bulldogs, who went 16-3 in the playoffs to capture the Ontario Hockey League crown, defeating the Windsor Spitfires in a seven-game championship series.

Mavrik Bourque, Olivier Nadeau and William Veillette scored for in regulation time for the Shawinigan Cataractes, who set a Quebec Major Junior Hockey League record with seven overtime victories en route to the President Cup title, their first in the franchise's 53 years of existence.

Marco Costantini made 33 saves in goal for Hamilton on Monday, while Antoine Coulombe stopped 39 of the 43 shots he faced.

In the preliminary round, the Cataractes used three power-play goals on seven chances to edge the Bulldogs 3-2.

Hamilton made significant changes to their approach for this rematch, allowing just one power-play opportunity while outshooting Shawinigan 38-30 in regulation time.

In an evenly played first period, each team hit a post early on and the shots were tight, as Hamilton led 9-8 in that department.

Bourque opened scoring when he redirected a Nadeau feed past Costantini at 14:39. Nadeau gained control of a loose puck in the left corner, and hit Bourque, whose shot found the net under Costantini's glove.

Grushnikov tied it less than two minutes later when he joined the rush on a 4-on-4 situation and finished off a slick pass from the right wing by McTavish at 16:29.

The play opened up in the second period and the scoring chances increased as a result.

McTavish put Hamilton ahead 1:23 into the second period, when his snap shot beat Coulombe just seconds after one of their power-play opportunities had expired.

Nadeau brought the Cataractes back once more, when he tipped Isaac Menard's point shot past Costantini. The tip came on a high shot that led to a review but was quickly confirmed.

From there, the goaltenders took over as Coulombe made 17 saves in the second period and Costantini was equally sharp as he blocked 14 Cataractes offerings.

That set the stage for the tense and thrilling third period.

The Bulldogs appeared to have taken a 3-2 lead with 12:27 remaining in regulation as Avery Hayes swatted a pass from behind the net that trickled through Coulombe and over the goal line. However, it did not count as the official blew the play down before it crossed the line, a call that stood after a lengthy video review.

Just 2:28 later, Vermette reached out and tipped an Angus Booth wrist shot high into the top corner past Constantini at 10:01. This time, it was the Bulldogs who answered in quick fashion as Morrison drifted into the slot and one-timed a feed from Ryan Winterton at 13:56.

Shawinigan, the 2012 Memorial Cup champions, finished second in the preliminary round, advancing with wins over Edmonton and Hamilton before dropping a 5-3 contest to the host Saint John Sea Dogs in the final round-robin game.

Hamilton struggled early in the event, falling to Saint John and Shawinigan before recording a 4-2 victory over Edmonton in its final preliminary round game to clinch its semifinal berth.

This report by The Canadian Press was first published June 27, 2022