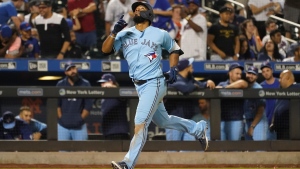 Toronto Blue Jays' Teoscar Hernandez gestures as he runs the bases after hitting a two-run home run during the ninth inning of a baseball game against the New York Mets, Saturday, July 24, 2021, in New York. (AP Photo/Mary Altaffer)

George Springer, Marcus Semien and Bo Bichette also homered for the Blue Jays, who overtook the San Francisco Giants for the MLB lead with 149 homers. The Giants entered the day with 146.

Trevor Richards (4-0) got the win, pitching a scoreless inning in relief.

Springer, a free agent target of the Mets in the winter, put the Blue Jays ahead 1-0 in the third inning with his eighth homer of the season off All-Star Taijuan Walker (7-4).

Walker retired the next two hitters before Bichette reached on an infield single and Hernandez homered to make it 3-0.

Springer, who has been booed by the home fans at Citi Field during the first two games of the series, drew some cheers in the bottom half of the inning when he dove on the left-center field warning track to rob Brandon Nimmo of an extra-base hit.

Semien won an 11-pitch matchup, driving a 3-2 breaking ball over the left field wall for his 24th homer. The three-run drive that made it 6-0 and chased Walker out of the game with no outs in the fifth.

Despite the six-run advantage, Blue Jays starter Hyun Jin Ryu was unable to escape the bottom half.

After retiring Kevin Pillar on a foul out, Ryu gave up five consecutive hits, including the last three that each drove in a run. Dom Smith's single made it 6-3 and finished Ryu.

Ryu allowed three runs and 10 hits in 4 1/3 innings. Richards then entered with runners on first and second, and struck out J.D. Davis and James McCann to end the threat.

Bichette extended the lead to 7-3 in the seventh with his 17th homer. He added an RBI single in the ninth before Hernandez connected for his second homer of the night and 15th of the season.

Blue Jays: Manager Charlie Montoya said right-handed starter Alek Manoah will not be making his next starts, instead throwing a simulated game Monday in Florida. Manoah, who nursing a bruise on the right side of his back, could rejoin the club when it returns to Toronto.

Mets: 2B Jeff McNeil missed his second straight game due to fatigue in his left leg. Luis Guillorme started in his place. â€¦ INF/OF Brandon Drury was recalled from Triple-A Syracuse. â€¦ RHP Nick Tropeano was optioned to Triple-A Syracuse.