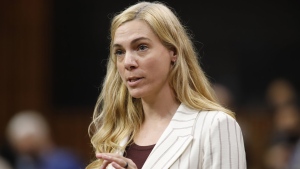 Pascale St-Onge rises during Question Period in the House of Commons on Parliament Hill in Ottawa on Monday, June 20, 2022. The sport minister is once again calling for change in Hockey Canada's leadership in the wake of new allegations against the troubled sporting body.THE CANADIAN PRESS/ Patrick Doyle

OTTAWA - Sport Minister Pascale St-Onge is once again calling for change in Hockey Canada's leadership in the wake of new allegations against the troubled sporting body.

The Globe and Mail reported Monday that Hockey Canada put player registration fees toward a second fund “for matters including but not limited to sexual abuse,” according to documents obtained by the newspaper.

The news follows revelations in July that another fund, known as the National Equity Fund, was used to settle sexual misconduct claims.

“I think it shows a total lack of transparency,” St-Onge told reporters on Parliament Hill Monday.

“And the other thing it shows is that sexual violence has been treated as an insurance problem at Hockey Canada instead of a systemic problem that needs to be addressed at the root of the problem.”

It was revealed in July that Hockey Canada had paid out $7.6 million in nine settlements related to sexual assault and sexual abuse claims since 1989.

Monday's news also shows those at the top of the organization need to resign, St-Onge said.

TSN reported in May that Hockey Canada had paid an undisclosed settlement to a woman who alleges she was sexually assaulted by eight players, including members of Canada's 2018 world junior team.

The complainant had been seeking $3.55 million dollars in damages. None of the allegations have been tested in court.

St-Onge ordered a forensic audit of Hockey Canada to ensure no public funds were used as part of the settlement.

An investigation is also underway into an alleged sexual assault involving members of the country's 2003 world junior team.

St-Onge and Prime Minister Justin Trudeau are among those who have called for Hockey Canada's executives to step down.

Board chair Michael Brind'Amour is the only executive to resign so far. He stepped down on Aug. 6, months before his term was set to expire at the end of November. He was replaced on an interim basis by Andrea Skinner.

Brind'Amour and Skinner are both set to appear in front of a federal government committee Tuesday about how the sporting body has handled allegations of sexual assault.

Hockey parents and the entire Canadian public will be looking for the executives to be transparent when they speak, said NDP MP Peter Julian, a member of the Standing Committee on Canadian Heritage.

“Hockey Canada has lost enormous credibility over the course of the summer and it remains to be seen if tomorrow their board chair will actually answer questions fulsomely, completely and transparently,” he said.

“But I think that's the only option available to Hockey Canada, to be open and transparent with Canadians. And they have failed that miserably over the last few months.”

Julian believes the federal government can do more to create change in hockey's national governing body. He said he's resumed his demand that St-Onge order an audit of Hockey Canada and their finances.

“We've been saying for some time that the federal government needs to take its responsibilities with national sports organizations,” he said. “They've had a very lackadaisical approach and it's time that changed.”

The federal government is using a number of tools to push for change in the sporting body and will continue to look at different ways it can act, St-Onge said Monday.

“Hockey Canada belongs to its members first and foremost,” she said. “It's also the parents that send registration fees that have the power to change the organization from within, it's the members of Hockey Canada that need to ask for this change as well.”

- With files from Abdulhamid Ibrahim in Toronto.

This report by The Canadian Press was first published Oct. 3, 2022.