Inside the bubble, NBA players have plenty of options 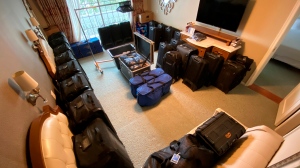 LAKE BUENA VISTA, Fla. -- Every team in the NBA bubble has played golf. Most have had at least a few players go fishing. Some have taken boats out. Bowling is available for a few hours most nights. The barbers arrive for the first time later this week. And the walking trail is pretty much always occupied by coaches or players.

On occasion at Walt Disney World, basketball even gets played.

This is the NBA's home away from home for the foreseeable future -- and efforts are being made to make the time here fun. The so-called bubble in Central Florida is where 22 teams have settled for about a week now, where they all will remain for another month and where teams that make the playoffs will be for considerably longer.

This summer away from home isn't ideal, for obvious reasons. Players and coaches are away from their families, many teams are missing players or other personnel because of the coronavirus, and there are daily reminders that even this well-isolated world was created during a pandemic. Medical personnel -- wearing gowns, masks, gloves and plastic visors -- are arriving to place a swab in everyone's mouth and two more in their nasal passages for the next COVID-19 test.

But the league is trying to make the days at Disney go a little faster, with activities available almost around the clock. And players are making the best of things; Denver even turned an off day into time for a full-team pool workout this week.

"I don't think you can ever build enough `we,' enough togetherness," Nuggets coach Michael Malone said.

Golf has been the free-time hit so far; a new private driving range just for NBA player use is scheduled to open Saturday, just to keep up with their demand. A few players -- including some who don't even play golf regularly, like Miami's Goran Dragic -- figured they might as well try to learn the game.

"It'll be good for me mentally to have something else to think about during the downtime," said Dragic, whose wife and children returned home to the family's native Slovenia on Wednesday. "So, I had my golf clubs sent here, just to try something new."

And, of course, there's the food.

Panned by some players upon arrival, the fare in quarantine wasn't quite the level that NBA types are used to seeing but has generally gotten decent reviews since. Those still in quarantine at Disney get three meals dropped off outside their door each day, with an array of items to choose from in those bags.

Teams have meal rooms set up with menus that were developed in co-operation with their own staffs and dietitians. And when all else fails, there are delivery options and room service offering everything from bisques to steaks to flourless chocolate cakes.

"If you're talking about it being a five-star restaurant, no, but if you talk about it being good food that you can eat and enjoy, I think it is," New Orleans coach Alvin Gentry said. "We're not eating off of fine china, but we're also eating off of biodegradable containers which I think is very smart to do. Obviously, we're not eating with silverware because that poses a threat as far as spreading the virus also."

The NBA even developed an app for the Disney life.

Every team was assigned a liaison to help book outings and handle needs, and the app includes everything from how to get food delivered to how to book extra practice time. There's a page within the app that allows players to report violations of health protocols, such as someone not wearing a mask, as well as links to mental health resources and even details on how players can register to vote if they haven't already.

In short, there are many ways to keep busy in the bubble.

"I brought my bike -- it's yet to leave the room, but the thought is nice, hopefully someday I get on it," Rivers said. "We've got a lot to do. It's still not normal, but that's fine with us. Again, we're going to live the best Disney life that we can."

NOTES: Brooklyn's newly signed Jamal Crawford, who will be the oldest player in the restart at 40 -- a bit ahead of fellow 40-year-old Udonis Haslem of Miami -- practiced with the Nets for the first time Wednesday. ... Indiana's Victor Oladipo, who previously said he wouldn't play in the restart, revealed Wednesday that his mind may be changing. "Coming down here and getting some practices in, getting my feet under me, going out there playing with the guys, there's a possibility that I could play," Oladipo said. ... The NBA slightly amended some protocols to address concerns some teams have about false positive tests for the coronavirus, adding review of an antibody test as part of the return-to-play path. The league made that announcement in a memo obtained by The Associated Press and other outlets. ... San Antonio announced that Trey Lyles had an emergency appendectomy Wednesday and will miss the remainder of the season. ... Sacramento's De'Aaron Fox will miss 7-10 days with a sprained left ankle. He got hurt in practice Wednesday.