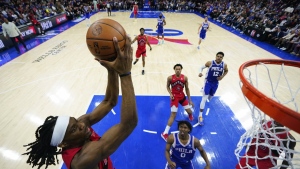 Toronto Raptors' Precious Achiuwa goes up for a shot during the second half of Game 5 in an NBA basketball first-round playoff series against the Philadelphia 76ers, Monday, April 25, 2022, in Philadelphia. THE CANADIAN PRESS/AP-Matt Slocum

Three years after the Raptors last played post-season basketball at home, nobody on this side of the border wants to see Toronto's run end yet.

The Raptors face elimination for the third consecutive time Thursday night when they host the Philadelphia 76ers in a do-or-die Game 6 of their opening-round playoff series.

"Raptors in 7" was trending on Twitter on Wednesday afternoon.

Raptors forward and Montreal native Chris Boucher said the excitement from fans is palpable. And the feeling is mutual.

"It's amazing," Boucher said. "They bring so much motivation. You can feel that basketball hasn't been in town for so long. The fans are into it. We're going to need them for Game 6. It's a big game. We can’t do it without them."

The last Raptors post-season run at home, of course, saw them go all the way to winning an NBA championship in 2019.

The Raptors shrugged off an unruly Sixers crowd in Philly in Monday's 103-88 win.

"I feel like a lot of their fans (behind the) bench, they were talking reckless, to be honest with you," Boucher said. "If they would have won the game, I bet they would have said a lot of stuff. Fortunately, we did. Me and Precious (Achiuwa) had a good time talking back to him."

The Raptors are two wins away from being the first team in NBA history to win a best-of-seven series after trailing 3-0. While they still trail 3-2, the pendulum seems to swinging in Toronto's favour. The Raptors have led or been tied a staggering 92.8 per cent over the last three games. And if not for Joel Embiid's clutch three-pointer to win Game 3, the Raptors would be in the position to close out the series in Game 6.

While the Raptors were a loose bunch on Wednesday, Sixers coach Doc Rivers was lashing out at reporters for questions about his history of coughing up series leads.

Rivers is the only coach to have given up three 3-1 leads. His most recent, in the Disneyworld bubble in 2020, was a stunning upset. The L.A. Clippers, led by Kawhi Leonard and Paul George, blew a 3-1 lead to the Denver Nuggets despite being up by double digits in the final three games.

"Let's win it," Rivers told reporters after Wednesday's practice. "Then we don't have to talk about it."

Sixers centre Joel Embiid, the league's leading scorer in the regular season, also suffered a torn ligament in his thumb in Game 3, an injury that will require surgery in the off-season. It's a similar injury that former Raptors guard Kyle Lowry played with throughout the 2019 championship run.

Lowry famously wore a padded compression glove he called his oven mitt virtually every minute he wasn't practising or playing, to keep his thumb from swelling and promote circulation. He underwent surgery shortly after Toronto won the Larry O'Brien Trophy.

Another potential plus for the Raptors is they haven't had a decent three-point shooting game, despite getting open shots. Just 25.8 per cent of their threes fell in Game 5. Their 32.1 per cent from long distance ranks them 13th of the 18 post-season teams. They averaged 34.9 per cent in the regular season.

"I think they’re pretty good (shots)," Nurse said. "The thing that I think we’ve done very well is making one more pass lately, they’re kicking it out and they’re rotating hard to that first guy and he’s just moving it to a wide-open guy in the corner, so that’s been encouraging."

So is a big game due?

A Game 7 if needed would be in Philadelphia on Saturday. The series winner faces the Miami Heat in the Eastern Conference semifinals.

Toronto Raptors' Precious Achiuwa goes up for a shot during the second half of Game 5 in an NBA basketball first-round playoff series against the Philadelphia 76ers, Monday, April 25, 2022, in Philadelphia. THE CANADIAN PRESS/AP-Matt Slocum