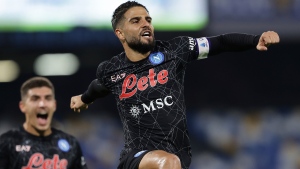 Napoli's Lorenzo Insigne celebrates after scoring his side's third goal during the Italian Serie A soccer match between Napoli and Bologna at the Diego Armando Maradona stadium in Naples, Italy, Thursday, Oct. 28, 2021. (Alessandro Garofalo/LaPresse via AP)

Reports out of Italy suggest an agreement has been struck between the MLS club and the Napoli forward, with sports TV channel Sportitalia saying an official announcement is expected Saturday.

A source, not authorized to speak on the negotiations, said that was a “likely” timeline. While nothing had been signed yet, talks were in the “final stages,” the source told The Canadian Press.

Insigne, who turns 31 on June 4, is expected to join Toronto in July when his current contract expires.

The Napoli captain represents a swing for the fences for a Toronto team looking to return to its winning ways after a dismal 6-18-10 season in 2021.

The Italian, a Naples native who made his first-team debut with Napoli in 2009, comes with a gilt-edged resume.

Insigne debuted for Italy in 2012 and has 10 goals in 53 appearances. He started for the Azzurri in their Euro 2020 final win over England and also played for his country at the 2014 World Cup and Euro 2016.

TFC has also been linked with 28-year-old Torino striker Andrea Belotti, another Italian international whose club contract is expiring this summer.

Maple Leaf Sports and Entertainment, which owns Toronto FC, reportedly is digging deep into its well-stocked wallet to get Insigne with a long-term contract that will make him the league's highest-paid player by quite a distance.

MLSE is no stranger to big-ticket items.

At five foot four and 130 pounds, Insigne is small but packs a punch. He can play in attack across the field, but is often deployed as a left winger where he can use his speed, ball skills and powerful shot to great effect.

Champions in 2017 and runners-up in 2016 and 2019, Toronto finished 26th out of 27 teams last year. The vast majority of the franchise's season-ticket base opted to forgo what little of the season that was played in Toronto, put off by the pandemic and the team's woeful on-field performance.

Instead they put their hopes - and ticket investment - in the 2022 season.

Bob Bradley was hired in the off-season to head up the rebuild as head coach and sporting director.

To make room for Insigne, Toronto will have to shed one of its three designated players - with more movement likely needed if Belotti also comes on board. While Spanish playmaker Alejandro Pozuelo, the league's MVP in 2020, appears committed to staying, U.S. international forward Jozy Altidore and Venezuelan winger Yeferson Soteldo both would seem open to a move.

After totalling 56 goals in his first five seasons in Toronto, the injury-plagued Altidore had just six over the last two seasons with four of those coming in 2021.

The 24-year-old Soteldo, meanwhile, seemed unhappy at times in his first year with the club. He had three goals and 10 assists in 24 games in MLS after leaving Brazil's Santos to come north.

The 30-year-old Pozuelo, who ranked fourth in the league in pay at $4.693 million, had one goal and four assists in an injury-interrupted season that saw him play in just 19 games.

Altidore ranked seventh in the league last season at $3.6 million while Soteldo made $1.965 million.

TFC could sell the two DPs. It is also allowed one buyout in the off-season, without counting against the “salary budget” cap.

Toronto has made waves with designated player signings in the past.

Giovinco left for greener pastures after the 2018 season but still has a home in Toronto. Known as the Atomic Ant, the diminutive Italian who turns 35 later this month has said he would like to come back.

In January 2014, there was the much-ballyhooed “bloody big deal” when TFC signed both England star Jermain Defoe and U.S. international Michael Bradley, son of Bob Bradley. Defoe, who was 31 at the time, lasted one season before returning home while Bradley, who was 26 when he came to Canada, became TFC captain.

At some $10 million apiece, Defoe and Bradley each broke the MLS record for transfer fees. Their combined cost doubled the expansion fee MLSE paid before entering the league in 2007.

MLS requires teams to adhere to a salary budget that was $4.9 million in 2021. But the maximum salary charge for a designated player was $612,500, with anything above that not counting against the cap.

Giovinco made $7.1 million in his final year with Toronto.