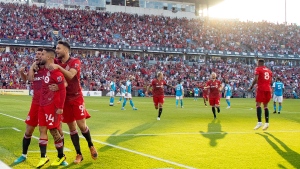 Toronto FC midfielder Jonathan Osorio (21) celebrates with teammates Lorenzo Insigne (24) and forward Jesús Jiménez (9) after scoring the first goal of the game against Charlotte FC against during first half MLS action in Toronto on Saturday July 23, 2022.THE CANADIAN PRESS/Chris Young

TORONTO -- Federico Bernardeschi scored one goal and set up another and Lorenzo Insigne collected an assist on their MLS debut as Toronto FC celebrated its new Italian star power with a 4-0 romp over expansion Charlotte FC on Saturday.

Captain Michael Bradley, who had 14 goals in his previous 258 MLS games, scored twice with Jonathan Osorio adding a single. Mark-Anthony Kaye had two assists as TFC led 4-0 at halftime.

Insigne and Bernardeschi came off at the break, with an eye to their fitness and Tuesday's Canadian Championship final in Vancouver. Job done and money well spent as TFC scored four goals in the first half of an MLS game for the first time in franchise history.

There was a party-like atmosphere at BMO Field thanks to anticipation over the two Italians' debut. Attendance was announced as a sellout of 29,067, well above the average of 23,676 over the previous 11 home matches this season.

And fans loved what they saw in the first half.

While early days, it was as if someone had turned the 'On' switch on the Toronto season. But at 6-12-4, the road back to respectability is a long one. Toronto entered weekend play in 13th spot in the 14-team Eastern Conference, five places and seven points below Charlotte (8-12-2).

Toronto had not posted a shutout in league play since a scoreless draw in Colorado on Sept. 25, 2021, conceding goals in 29 straight matches.

The home side came out with renewed energy with the backing of a loud crowd. Toronto led 2-0 after 10 minutes on goals by Osorio and Bradley.

Bernardeschi made it 3-0 in the 31st minute with an elegant left-footed strike from outside the penalty box that beat goalkeeper Kristijan Kahlina en route to the corner of the goal. The former Juventus winger punched the air in jubilation and was swarmed by his new teammates.

According to Opta, the 28-year-old Bernardeschi is the first player to record a goal and an assist before halftime of his first MLS appearance since Fredy Montero for Seattle in 2009.

Insigne played provider in first-half stoppage time, deftly flicking the ball to an onrushing Bradley after Osorio dispossessed a Charlotte player. Bradley, who also scored two goals against Philadelphia in the 2019 season opener, steamed past a defender and chipped the 'keeper for a 4-0 lead.

It was the first time Charlotte had conceded four goals in a game in league play.

The second half was less notable without the two Italian wingers. Charlotte began to string passes together and the contest was far more even.

But things went from bad to worse for the visitors in the 65th minute when captain Christian Fuchs was shown a straight red card for cynically dragging Jayden Nelson down as the teenager outpaced him with only the goalkeeper to beat. Charlotte was irate that Toronto defender Doneil Hendry had not been sanctioned immediately before for a hard tackle on Kamil Jozwiak in the Toronto penalty box.

In the uproar that followed, referee Filip Dujic showed the Charlotte bench a yellow card twice. Interim coach Christian Lattanzio had already been cautioned but remained on the touchline

Toronto finished with 10 men with Kaye having to leave the field injured and coach Bob Bradley out of substitutions.

The 31-year-old Insigne started on the left side of the Toronto attack with Bernardeschi on the right and Spanish forward Jimenez in the middle.

Insigne, while still finding his fitness, showed a touch of class with almost every possession, be it a little flick or full-blooded cross.

It was Caribbean Carnival Night at BMO Field but the flavour was definitely Italian. There was a throng outside the players' entrance with Insigne signing autographs as he made his way in - and a palpable buzz inside the lakeside venue.

Fans arrived inside to find Insigne flags, emblazoned with Il Magnifico and the Italian's trademark heart goal celebration sign, on their seat. And the Italian received a warm reception as he came out for warm-up and an even louder one when he was announced before kickoff.

The fans had more to cheer about with a Toronto goal in the fourth minute, with Osorio - back in the lineup after clearing concussion protocols - in the right place at the right time as Guzman Carujo's attempt at a penalty box clearance ricocheted off the Canadian midfielder into the back of the net. It was Osorio's sixth of the season and his 55th for TFC in all competitions.

It also ended a 199-minute Toronto scoring drought. TFC had failed to score in seven of its previous 12 matches.

Two minute later, Bernardeschi fired just wide. The Italian played provider in the 10th minute, with Bradley flicking on his corner with a fine header from the near post for his second goal of the season. Both were headers, unlike his previous 13 career MLS scores.

A Jimenez goal in the 29th minute was called back because of offside.

Henry came on at the start of the second half, kicking off his second stint with Toronto.

Insigne, the former Napoi captain, and Bernardeschi arrived during the league's secondary transfer window, which opened July 7. Both were out of contract with Insigne signing a pre-contract with TFC in January.

Insigne's debut was delayed by a calf issue while Bernardeschi only arrived July 15. Fellow Italian Domenico Criscito made his fourth appearance Saturday at left back, coming off in the 76th minute.

Insigne's four-year deal makes him the highest-paid player in MSL. Chicago's Xherdan Shaqiri had held top spot on the pay scale at US$8.15 million this season.

Toronto's backline remains a work in progress with Kosi Tompson (US$70,760) lining up alongside Lukas MacNaughton (US$86,100), Shane O'Neill (US$358,000) and Criscito, the former Genoa captain whose salary has yet to be disclosed by the MLS Players Association.

The game marked the first meeting between Toronto and Charlotte.

Charlotte arrived one point out of the playoffs thanks in large part to a healthy home record (7-3-0). It has struggled on the road at 1-9-2, with the lone win coming July 3 in Houston.

Charlotte has conceded two or more goals in nine of 12 road games, compared to just once in its 10 home games

The team has already gone through one coach, parting ways with head coach Miguel Angel Ramirez on May 31 with the team at 5-8-1.

Charlotte was coming off a friendly win over England's Chelsea, prevailing in a penalty shootout after the game finished knotted at 1-1 before 52,673 at Bank of America Stadium.

Its last league outing was a 3-2 loss last Saturday at Inter Miami that saw Charlotte go up 2-0 on a pair of goals by former Whitecap Yordy Reyna, only to lose 3-2 on a 93rd-minute winner by Emerson Rodriguez. That snapped a two-game win streak.