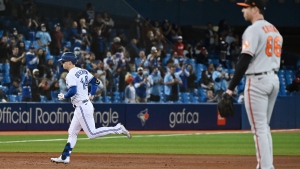 The Jays held off the late-charging Baltimore Orioles 6-4 before 28,859 at Rogers Centre.

The Boston Red Sox and Seattle Mariners began the final weekend one game up on Toronto.

Catcher Danny Jansen and outfielder Corey Dickerson helped Matz with a two-run homer in the third inning and solo shot in the sixth respectively.

Kelvin Gutierrez ended Matz's shutout bid with a lead-off homer to left in the eighth inning.

Matz (14-7) then departed after giving up his only walk of the night.

He struck out five and yielded six hits in his 88-pitch outing.

Matz departed to a standing ovation from the Toronto faithful.

After allowing a single to Trey Mancini to score another Baltimore run, Romano loaded the bases with a walk to Pedro Severino. but he managed to get the batter who started the Blue Jays mess, Gutierrez, on a force out.

Romano struck out the visiting side in the final inning, but tossed a personal season-high 32 pitches for his 23rd save.

The Orioles (52-107) will finish with the worst record in the AL this season.

Baltimore was coming off a series in which they took two or three from the Red Sox.

Orioles starter Thomas Eshelman (0-3) looked on track for his first win in more than a year after the Blue Jays went six up and six down in the first two innings.

The third inning was a different story, however.

Santiago Espinal led off with a hard-hit single to left field and came home on Jansen's first-pitch homer to the second deck in left field.

Toronto's catcher smashed a slider for his 16th.

This time, Dickerson drilled a homer to right with two out.

Espinal followed with a double down the left-field line, and he scored on Jansen's double to left.

Cavan Biggio kept the inning going with a single to left to score Jansen.

It was Biggio's third single in his first game since Aug. 2.

Biggio exhibited hustle when he scored from second on George Springer's infield hit to put Toronto ahead 6-0.

Biggio was a surprise starter at first base.

Blue Jays manager Charlie Montoyo wanted to give Vladimir Guerrero Jr. a day off from fielding his position.

The slugger was instead employed as Toronto's designated hitter.

Biggio was the only option because of the right-hand injury to Lourdes Gurriel Jr., who occasionally replaced Guerrero at first base this season.

Beset by an assortment of hand, back, neck and elbow injuries this summer, Biggio made Montoyo's decision a smart one.

Biggio hit three singles and played the infield well, especially in the seventh when he lassoed a wild throw from Espinal and managed to tag out Baltimore right-fielder Austin Hays.