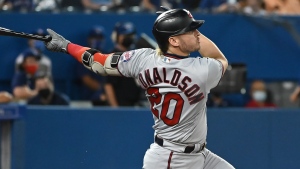 Minnesota Twins' Josh Donaldson hits a solo home run in the in the third inning of an American League baseball game against the Toronto Blue Jays in Toronto on Friday, Sept. 17, 2021. THE CANADIAN PRESS/Jon Blacker

Donaldson belted the middle of three consecutive home runs in a five-run third inning to help the Twins defeat the Toronto Blue Jays 7-3.

The Blue Jays (82-65) began Friday holding down one of the two American League wild-card spots. But a loss to the Twins (65-83) was painful, considering they have the third-fewest wins in the AL behind the Texas Rangers and Baltimore Orioles.

Donaldson, who also doubled to left in the fifth inning, made his second trip back to Toronto since he was traded away from the Blue Jays to Cleveland on Aug. 31, 2018.

Donaldson's first game at Rogers Centre in a new uniform was as a member of the Atlanta Braves two years ago. Like that occasion in August 2019, the crowd of 14,798 gave the 35-year-old a standing ovation on Friday.

The 2015 AL MVP stepped out of the batter box and removed his helmet to acknowledge the acclaim.

While the Twins benefited from four homers in the opener of the three-game weekend series, Blue Jays slugger Vladimir Guerrero Jr. kept up his pace with his 46th of the season, a solo shot in the third inning to cut the Twins lead to 6-3.

The 22-year-old Guerrero matched Joe Dimaggio's 46 homers in 1937 at 22 and moved to within one of Eddie Matthews's record for round-trippers in a single season by a player 22 or younger. Matthews slammed 47 in 1953 before his 22nd birthday.

Blue Jays starter Hyun Jin Ryu (13-9) was roughed up early. He lasted only 48 pitches and was replaced after the Donaldson homer that gave the Twins a 5-2 advantage.

The Blue Jays went ahead in the bottom half of the second. Corey Dickerson doubled and scored on a throwing error from Twins shortstop Jorge Polanco on Danny Jansen's grounder. Toronto third baseman Jake Lamb doubled in Jansen.

In the third, a Byron Buxton double scored Ryan Jeffers to tie the game. Polanco and Donaldson followed with homers. Ross Stripling then replaced Ryu, and the Blue Jays reliever was greeted with a Sano homer to straightaway centre field.

In the sixth, right-hander Julian Merryweather, acquired in the Donaldson trade, took over the Blue Jays mound. He surrendered a lead-off homer to Rooker.

Michael Pineda (7-8) recorded his third win in a row, going 5 2/3 innings, giving up only three hits and one earned run.

This report by The Canadian Press was first published September 17, 2021.