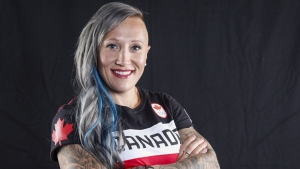 LAKE PLACID, N.Y. - Kaillie Humphries competed as a guest in USA Bobsled's push trials Thursday while the two-time Olympic gold medallist from Calgary awaits permission to compete for the Americans.

Her relationship with Bobsleigh Canada Skeleton now acrimonious and a subject of legal battles, Humphries is seeking her release from Canada to compete for the United States.

As a forerunner for the competition in Lake Placid, N.Y., Humphries tested the timing systems before the other competitors took their runs.

Her times were not released, since they didn't factor into the final standings.

Since U.S. push trials are not regulated by the International Bobsleigh and Skeleton Federation (IBSF), Humphries did not require her release from Canada to participate.

“The IBSF regulates IBSF events but not any event on a national level,” IBSF secretary-general Heike Groesswang told The Canadian Press in an email Thursday.

“So it is not in our competence to decide whether Kaillie Humphries may participate in a national push event.”

Bobsleigh Canada Skeleton declined to comment on Humphries' participation in the American trials.

Humphries and brakewoman Heather Moyse won bobsled gold in both 2010 and 2014 to become the first to repeat as Olympic women's champions.

Humphries also piloted Canada to bronze in 2018 with Phylicia George.

The Americans are ready to welcome Humphries, but she requires a letter of release from the sport's Canadian governing body by Sept. 30 to represent the U.S. internationally in 2019-20.

The 34-year-old went to court this week to get an injunction forcing BCS to release her, but a Calgary judge denied her request.

Humphries did not compete for Canada last season after filing a harassment complaint with BCS in August of 2018.

BCS handed her harassment claim to an independent third-party company specializing in investigations of such matters.

Hill Advisory Services concluded that “in the investigator's opinion there has been no breach to relevant policy.”

Humphries has also launched a multi-million dollar lawsuit against BCS alleging verbal and mental harassment by a coach and accusing BCS management of mishandling her complaint.

Her claims have not been proven in court and BCS has not yet filed a statement of defence.

After her bid for an injunction was turned down Tuesday, BCS high-performance director Chris Le Bihan said the door remains open for Humphries to return to the Canadian team.

Humphries declined the invitation, saying she would not return under the team's current management.