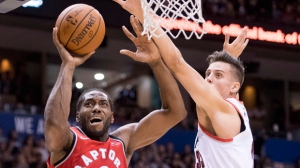 Players can put pen to paper at 12 p.m. ET on Saturday, though news of pending transactions often leaks out before the official signing period begins.

Leonard, who led the Toronto Raptors to their first NBA title last month, joined other free agents in being able to negotiate with teams starting last Sunday. But unlike most of the other big-name free agents, Leonard wasn't tied to any team within the first 24 hours of the negotiation period.

The Los Angeles native primarily has been linked to three teams in the past week - the Raptors, the L.A. Lakers and L.A. Clippers.

While the superstar forward has taken his time mulling his options in free agency, social media has engaged in non-stop speculation as to Leonard's immediate future.

The story took on a new look Wednesday when the journey of a black van from Pearson Airport to downtown Toronto was broadcast live on news station CP24 via helicopter.

The van's unknown passengers disembarked from the private plane of Maple Leafs Sports & Entertainment, the organization that owns the Raptors.

The plane landed in Toronto after leaving Los Angeles, leading some to believe that Leonard might be on board. The van eventually made its way to a downtown Toronto hotel, where fans had gathered as rumours intensified that Leonard was in town.

However, there never was any confirmation that Leonard was in the van or even in the city.

CTV reported Friday that the MLSE plane flew to San Diego, where Leonard has a home, and then returned to the air.

Meanwhile, billboards encouraging Leonard to stay have emerged in Toronto, with signs also popping up in Los Angeles calling on the star forward to return home.

The Raptors, by virtue of NBA rules, can sign Leonard for more money (US$190 million) and more term (five years) than other teams (about $140 million, four years) on a maximum contract this off-season.

However, Leonard could sign a shorter-term contract and be eligible for a bigger salary after two more years, when he'd have played 10 seasons in the NBA.