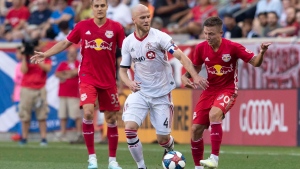 Alejandro Romero Gamarra, on the right side, split a pair of defenders and, near the corner of the 6-yard box, played a low cross that deflected off defender Chris Mavinga into the net to give the Red Bulls (10-9-4) the lead in the 55th minute.

Justin Morrow was shown a straight red card in the 89th minute for denying New York's Bradley Wright-Phillips of an obvious goal scoring opportunity. Lawrence made it 2-0 in the In the first minute of stoppage time. Daniel Royer's header was parried by goalkeeper Quentin Westburg, but Lawrence volleyed the rebound into an empty net.