Leafs D Dermott to have shoulder surgery, will be out at least six months 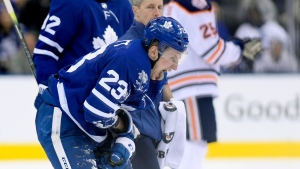 Toronto Maple Leafs defenceman Travis Dermott (23) leaves the ice, injured, with a trainer during third period NHL action against the Edmonton Oilers, in Toronto, Wednesday, Feb. 27, 2019. The Maple Leafs say Dermott will undergo shoulder surgery on Friday and is expected to be out of action a minimum of six months. THE CANADIAN PRESS/Nathan Denette

TORONTO -- The Toronto Maple Leafs say defenceman Travis Dermott will undergo shoulder surgery on Friday and is expected to be out of action a minimum of six months.

The prognosis means Dermott will miss training camp and the beginning of the 2019-20 season and won't be avaialble until the second week of November at the earliest.

The 22-year-old Dermott had four goals and 13 assists in 64 games for the Maple Leafs this season. He added a goal and two assists in seven playoff games in Toronto's first-round defeat to Boston.

Dermott originally injured his shoulder during Toronto's 6-2 win over Edmonton on Feb. 27 when he was checked into the boards by Oilers forward Brad Malone. He missed 14 contests, then returned for Toronto's last five regular-season games and its playoff series with the Bruins.

Dermott was originally selected by the Maple Leafs in the second round (34th overall) of the 2015 NHL draft.