Leafs down Bruins, will play Lightning in first round of the playoffs 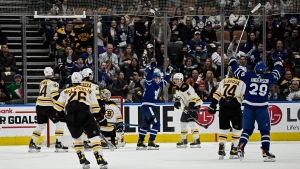 Toronto Maple Leafs' Nicholas Abruzzese celebrates after scoring against the Boston Bruins during the first period of their final regular season game in Toronto on Friday, April 29, 2022. THE CANADIAN PRESS/Aaron Vincent Elkaim

TORONTO - William Nylander scored twice as the Toronto Maple Leafs defeated the Boston Bruins 5-2 on Friday in a regular-season finale that saw both teams rest most of their stars ahead of the playoffs.

With the victory, the Leafs ensured they will face the two-time defending Stanley Cup champion Tampa Bay Lightning in the first round, while the Bruins are set to meet the Carolina Hurricanes.

Trent Frederic and Jake DeBrusk replied for Boston (51-26-5), which got 22 stops from Jeremy Swayman. Craig Smith had two assists.

Having already locked up the Atlantic Division's No. 2 seed, the Leafs rested Auston Matthews, Mitch Marner and John Tavares up front, while No. 1 goaltender Jack Campbell served as the backup.

The Bruins, meanwhile, were minus Patrice Bergeron, David Pastrnak, Brad Marchand and Taylor Hall. Charlie McAvoy sat out on defence.

The combined absences from both clubs added up to nearly US$73 million in sidelined salary-cap dollars.

Boston, which was playing the second of a back-to-back, still had a chance of catching Tampa for third in the division entering play, but will instead finish as the Eastern Conference's first wild-card seed.

The Bruins scored 70 seconds into the opening period of a game that had an exhibition feel with little intensity when Frederic poked his eighth goal of the season past Kallgren.

Toronto responded at 3:51 on the power play after Boston's Marc McLaughlin was assessed a four-minute penalty for high-sticking when Mark Giordano's point shot glanced off Mikheyev in front for his 21st of 2021-22.

The Leafs took the lead at 13:16 when Nylander stole the puck from McLaughlin and raced in alone on Swayman before adding to a career-high goal total with his 33rd.

Playing his ninth NHL game after signing with Toronto following the conclusion of his U.S. college season in late March, Abruzzese then scored his first in the NHL on a nice deflection of a Morgan Rielly point shot with 6.7 seconds left in the period.

The Bruins started to throw their weight around in the second, but there still wasn't much emotion until late in period when Tomas Nosek cross-checked Toronto defenceman Timothy Liljegren from behind into the boards.

Rielly responded by grappling with the Boston forward for offsetting minor penalties before Nylander scored his 34th eight minutes into the third.

Nick Foligno, a Toronto trade deadline acquisition last season, jammed a puck home with 9:36 left in regulation, but the home side correctly challenged for offside.

DeBrusk eventually made it 4-2 with his 25th with 7:11 left in regulation, but Kallgren shut the door from there for his eighth victory before Engvall scored his 15th into an empty net.

NOTES: The Leafs have home-ice advantage for the first time since 2004 - the last time they won a playoff series ... Toronto has never played Tampa in the playoffs ... The Bruins eliminated the Leafs in seven games in the opening round of the post-season in both 2018 and 2019.