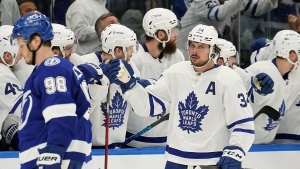 TORONTO - Auston Matthews let his actions on the ice do the talking all season.

Toronto's star sniper also didn't mince words with the Maple Leafs preparing to face yet another Game 7 showdown with the intense pressure of past playoff failures casting a long shadow.

The NHL's first 60-goal man in more than a decade wants his team to embrace the moment.

In truth, he expects it.

“That's all you can do,” Matthews said in the aftermath of Thursday's 4-3 overtime loss that saw the Tampa Bay Lightning avoid elimination and force a winner-take-all finale in a series that's featured razor-thin margins and little sustained momentum.

“We've just got to put our balls on the line and go for it.”

The Leafs will host the two-time defending Stanley Cup champions in Saturday's Game 7 as they endeavour to finally flip a post-season script littered with infamous collapses and missed opportunities.

“That's the perfect way to describe Game 7s,” Toronto head coach Sheldon Keefe said Friday of his best player's comments before the Leafs flew home. “It requires an all-in effort. You've got to put everything you have into the game.

“It's going to be two teams that will leave it all out there.”

“We've got to have that mentality,” said the veteran defenceman. “We've got to believe in ourselves. We're good enough to beat anybody.”

The Lightning, however, aren't just anybody.

A battle-tested and battle-scarred roster knows what's required at this time of year after overcoming its own playoff heartbreak.

Toronto, meanwhile, is still desperately trying to get to that level as the team continues to search for its first series victory since 2004.

The core of this Leafs group - Matthews, Mitch Marner, William Nylander and Morgan Rielly - has now had eight chances over the last five playoffs to beat an opponent in an elimination game.

They've failed to get the job done each time.

The Leafs could have altered the narrative in Game 7 last spring at home against the Montreal Canadiens - the rink was empty save for 550 health-care workers because of COVID-19 restrictions - but fell flat to put a dubious exclamation point on a blown 3-1 series lead.

Then there was Toronto's inability to beat the Columbus Blue Jackets in the 2020 post-season bubble and back-to-back seven-game defeats to the Boston Bruins in 2018 and 2019.

But challenges are something these Leafs have met head-on all season. They started slow, found their game in the fall and dealt with a massive coronavirus outbreak, only to finish with a franchise-record 115 points - good for second in the Atlantic Division and home-ice advantage in the first round.

Toronto has also fought back from 2-0 deficits over the last two games versus Tampa, winning Tuesday at Scotiabank Arena before coming up short in Thursday's overtime thriller.

“All the work we put to get into this series and to compete in this series has prepared us to be in a situation where we give ourselves a chance to win,” Keefe said. “Because of all that work, (Game 7) happens to be in Toronto.

“The feeling in our team is one of great confidence.”

On the other side, Tampa head coach Jon Cooper said his players can't assume the Leafs' post-season demons will be a factor Saturday.

“I don't think we can look back at what happened to Toronto in past and think, 'We got this,”' he said. “We'd be sorely mistaken if that's the attitude we took.”

Acquired from the Seattle Kraken before the trade deadline, Giordano remembers the buzz of the last Game 7 in Toronto some 18 years ago when the Leafs topped the Ottawa Senators in the first round.

“It's a huge opportunity for us to be a part of that as players,” said the 38-year-old, who grew up in Canada's largest city. “We have one game where it's all on the line.

The good news for Toronto is the team's big guns have led the way most of the series, with Matthews, Marner, Nylander and captain John Tavares all stepping up at key times.

“They've been leaders,” Giordano said. “I've just been really impressed with the demeanour of the group.”

He added the butterflies for Saturday will probably start earlier than usual.

“Gonna be hard to have your pre-game nap and all that because you're going to be so excited,” he said. “But that's a good thing. That means you care and you're really looking forward to playing in that game.

“It's gonna be an amazing atmosphere.”

Keefe believes, like Toronto's best player stated emphatically Thursday after getting agonizingly close to finally breaking through its playoff ceiling, that the Leafs will rise to the occasion.

“This team has got lots of fight,” he said. “Doesn't make the game or the challenge or the opponent any easier, but we certainly aren't uncomfortable. We're ready for it.”

This report by The Canadian Press was first published May 13, 2022.