Leafs forward Johnsson out for season after undergoing knee surgery 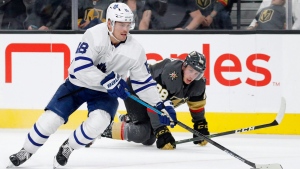 TORONTO - The Toronto Maple Leafs will be without forward Andreas Johnsson for the rest of the season.

The Maple Leafs announced Wednesday that Johnsson is expected to miss six months after undergoing right knee surgery earlier in the day.

Johnsson was injured in the first period of a 3-2 home loss to the Dallas Stars last Thursday when he collided with teammate Kasperi Kapanen.

The Leafs said at the time of the injury that Johnsson would be out at least eight weeks.

The 25-year-old Swede has eight goals and 13 assists in 43 games with the Maple Leafs this season.

Malgin, 23, has 12 points (four goals, eight assists) in 36 games with the Panthers this season.

Marchment recorded an assist in four games with the Leafs and 13 goals and five assists in 24 games with the American Hockey League's Toronto Marlies.