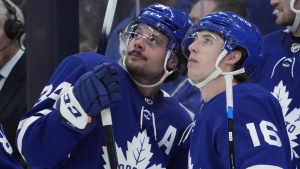 TORONTO - The message from the Maple Leafs - and to themselves - has been consistent all season.

Head down, one foot in front of the other, don't look too far ahead.

Learn from a painful past, but don't dwell too long on the rear-view mirror's ugly reality.

Under the intense, never-ending spotlight of hockey's biggest market, and coupled with what could be a crushing weight of playoff baggage, it was the only way forward for a roster pockmarked by recent failures.

As players set individual career-highs and franchise records fell in 2021-22, Toronto never seemed to stray much from its collective resting heart rate, even during a sputtering start to the schedule.

“We just try to go out there and give ourselves the best opportunity on a daily basis,” said captain John Tavares. “Whatever it is, we just want to go at it head-on.”

“There's always topics of conversation floating around,” added star sniper Auston Matthews. “There's only so much that we can control.”

The Leafs will be looking to continue down that same path with blinders still in place as they pivot to meet their most daunting task to date - the two-time defending Stanley Cup champion Tampa Bay Lightning in the first round of the post-season.

“A massive challenge,” said Toronto head coach Sheldon Keefe, whose team hosts Game 1 of the best-of-seven series Monday. “But when I look at our group, I think the harder the better.

The Leafs finished the schedule with 115 points - 10 more than the franchise's previous high - while their 54 wins eclipsed the old benchmark of 49.

Matthews became the first Toronto player to score 50 goals since 1993-94, then bagged five more to set a new Leafs' record for a season before eventually reaching an eye-popping 60 in 73 games.

But those numbers and accolades, including the Leafs' glittering special teams, won't mean much if Toronto is once again unable to get past the first round - despite the fact its opponent accumulated 110 points and wound up with the NHL's eighth-best record.

That's simply the reality for a club that hasn't won a playoff series since 2004 or lifted the Cup since the NHL's Original Six era.

“We know we're in a special market, special fan base that is going to add a lot of fuel for us and push us along,” Tavares said. “That's the special part about being here.”

The most recent playoff disaster, however, came last spring when the Leafs blew a golden opportunity to change the narrative by allowing the underdog Montreal Canadiens to storm back from a 3-1 deficit in the first round and pull off a stunning seven-game upset.

Toronto defenceman Morgan Rielly said the players talked a lot over the summer and into training camp about what happened, but didn't harp on the nightmare.

“It's a little bit of a balancing act ... you want to address it and you want to learn from it, but you also want to move on,” he said. “I don't think that's anything that anyone in our room's going to look back on fondly unless we right the ship and accomplish the ultimate goal.

“We'll hopefully be able to look back and say, 'You know, that was a big turning point for us.' But until that happens, you almost want to block it out and deal with it later.”

Prior the Canadiens' debacle, Toronto didn't show up against the Columbus Blue Jackets in the 2020 post-season bubble's qualifying round. That followed back-to-back seven-game defeats to the Boston Bruins - including in 2019 when the Leafs had a chance to close things out on home ice in Game 6 and couldn't get it done.

“Everyone has experience and learns from the past, good or bad,” said Tavares, who suffered a scary injury in last spring's playoff opener and missed the rest of the series. “You have to grow from that, whether it's as a hockey player or even as a person.”

The Lightning, meanwhile, know a bit about the pressure their first-round opponent faces.

Tampa and its roster led by Steven Stamkos, Nikita Kucherov, Brayden Point, Victor Hedman and Andrei Vasilevskiy won the Presidents' Trophy in 2018-19 before getting swept four straight by Columbus.

Instead of blowing things up, the organization regrouped, setting the stage for consecutive titles.

“There's going to be a lot of hype going into this round,” said Stamkos, the Lightning captain. “But our group is a mature group. We know how to handle a lot of different situations come playoff time.

“We'll have to lean on our experience.”

Something that Toronto hopes to finally gain.

“They understand how to play and how to win in the playoffs,” said Rielly, who leads Toronto's improved blue-line corps. “And we're trying to figure that out.”

Veteran forward Jason Spezza, one of three Leafs along with Mark Giordano and Wayne Simmonds to play more than 1,000 games without winning a Cup, commended Keefe's approach.

“With the failure we had last year, it would have been easy to look past the regular season,” Spezza said. “Sheldon did a great job of keeping us on task, really game-to-game, week-to-week, finding key things within games, especially down the stretch.

“We didn't look forward at all.”

Keefe said everything the team has done this season - every last detail - was to prepare for the playoffs.

The page is ready to turn. It remains to be seen if Toronto's script flips.

“We have absolute respect for the Tampa Bay Lightning in what they've accomplished and who they are,” Keefe said. “Yet we have great belief in our own group.

“We're ready for a battle.”

This report by The Canadian Press was first published May 1, 2022.