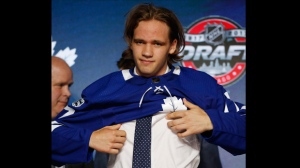 Timothy Liljegren puts on a Toronto Maple Leafs jersey after being selected by the team in the first round of the NHL hockey draft, Friday, June 23, 2017, in Chicago. (AP Photo/Nam Y. Huh)

TORONTO - The Toronto Maple Leafs have made another blue-line move, recalling Timothy Liljegren from the American Hockey League Marlies.

On Monday, the team summoned Swedish teenager Rasmus Sandin from their top farm team and placed Morgan Rielly on injured reserve, saying he will be out a minimum of eight weeks with a fractured foot.

Rielly was hurt blocking a shot in Sunday's 8-4 road loss against the Florida Panthers.

The Leafs have been without Jake Muzzin - another top-4 defenceman - since he broke his foot Dec. 27. The team said at the time the 30-year-old was listed as week-to-week, but he was placed on IR before Sunday's loss.

The 20-year-old Liljegren has four goals and 20 assists in 33 games with the Marlies this season.

Toronto picked the Swede in the first round (17th overall) of the 2017 NHL draft.