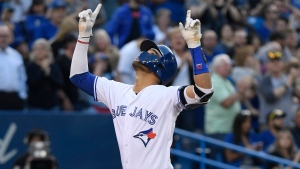 Toronto Blue Jays outfielder Lourdes Gurriel Jr., has been named the team's player of the year and most improved player for 2019.

Gurriel edged second baseman Cavan Biggio for the Neil MacCarl Award as player of the year in voting conducted by the Toronto chapter of the Baseball Writers' Association of America.

After struggling at the plate and on defence at second base to open 2019, Gurriel was sent to triple-A Buffalo on April 15 and converted to an outfielder.

Gurriel missed chunks of the last two months because of a left quad strain and an appendectomy.

Meanwhile, closer Ken Giles was named the team's pitcher of the year, shortstop Bo Bichette got the rookie of the year nod and first baseman Justin Smoak earned the John Cerutti Award recipient for displaying goodwill, co-operation and character.

Biggio was second in the rookie of the year vote, while former top prospect Vladimir Guerrero Jr., was third.