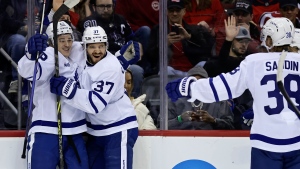 Matt Murray made 34 saves and the Toronto Maple Leafs beat the Devils 2-1 Wednesday night in a game in which New Jersey had three goals disallowed. The final disallowed goal resulted in fans pelting the ice with debris, causing play to be stopped for more than five minutes.

“Nobody feels good. I don't feel good,” said Devils coach Lindy Ruff, whose team also hit two goalposts. “I don't like the feeling. I don't like the losing; I know it's been a while, but you don't want that feeling. Now you gotta get over that and get ready for your next game.”

While the Maple Leafs enjoyed their seventh win in 11 games (7-1-3) and the goals by John Tavares and Pontus Holmberg, they were miffed about the debris, including cans of beer, that whizzed by their heads.

“You take cover,” said Toronto coach Sheldon Keefe, whose team briefly went to the locker room. “It's all you can do. I've been through that experience a few other times ... but I felt like it could get dangerous.”

The three overturned goals riled the sellout crowd at the Prudential Center, but the calls appeared correct.

Goals by Nate Bastian and Damon Severson waved off in the first and second periods, respectively, for goaltender interference. A short-handed tally by Erik Haula was overruled by officials because he kicked the puck into the net. The fact the puck hit off the stake off a Leafs' player didn't alter the ruling.

Haula skated onto the ice to try to get the fans to stop tossing debris.

“I don't care if I get a beer spilt on me but I got gear on. There's other people there and you'd hate to see somebody get knocked with something in the head,” said Haula, who added he was hit by a chicken finger.

Toronto became the first team to beat the Devils (16-4) since Washington on Oct. 24.

“We needed to get a win here today, no matter who we're playing,” Keefe said. “I mean, that's a tremendous hockey team over there. And they deserve everything that they've gotten here to date. ... This is a character win for our team.”

Dougie Hamilton scored on a tip-in with 5:08 to play, bringing the Prudential Center crowd into the game.

“At the end of the game, it was gritty,” Murray said.

The Devils' winning streak tied for the fifth-longest in NHL history and was four games shy of the record set by Mario Lemieux and the Pittsburgh Penguins in 1993. New Jersey's other 13-game run was in 2001.

“It's definitely frustrating, 100%, but nothing we can do,” Hischier said. “Refs make the call and there's nothing that's going to change it, so we got to stick with it ... .”

Murray was outstanding, particularly in the final 40 minutes, stopping 29 of 30 shots.

Mitch Marner set up Tavares' 12th goal of the season, outworking Hamilton and Jonas Siegenthaler along the boards and behind the net and finding the Leafs captain in front, where he beat Vitek Vanecek at 11:41.

Less than three minutes later, Leafs defenseman Rasmus Sandin closed from the point to keep the puck in the Devils zone. It slid to Holmberg, who scored his first NHL goal at 14:03.

With Morgan Reilly out with a knee injury, Toronto acquired defenseman Conor Timmins from the Arizona Coyotes on Wednesday for forward Curtis Douglas. Timmons had no points in two games with the Coyotes this season. Douglas, 22, was a fourth-round pick (No. 106) by the Dallas Stars in the 2018 NHL Draft.

Maple Leafs: At Minnesota on Friday.

Devils: At Buffalo on Friday night.