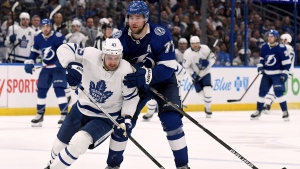 Maple Leafs forward Kyle Clifford will have a hearing Tuesday with the NHL's department of player safety after receiving a major penalty in Toronto's playoff-opening win over the Tampa Bay Lightning on Monday.

Clifford was assessed a major for boarding and a game misconduct just seven minutes into Game 1 for a hit on Tampa Bay's Ross Colton.

Colton was sent face-first into the boards but escaped serious injury on the play.

The Maple Leafs killed off the ensuing five-minute power play and opened the best-of-seven series with a 5-0 win over the two-time defending Stanley Cup champions.

The NHL's department of player safety also announced Tuesday that Toronto forward Wayne Simmonds and Tampa Bay forwards Corey Perry and Patrick Maroon have each been fined US$2,250, the maximum allowable under the collective bargaining agreement, for unsportsmanlike conduct during Game 1.

The three players were instigators in a line brawl that erupted midway through the third period.