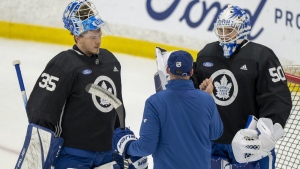 TORONTO - Ilya Samsonov made a couple acrobatic saves during his first official on-ice session with the Maple Leafs.

A few hours later, it was Matt Murray's turn to set up shop in the same crease as Toronto's second training camp group went through the paces.

Kept apart Thursday, the organization is banking on a goaltending duo with plenty to prove coming together in tandem to stabilize hockey's most important position - and by far the Leafs' biggest question mark heading into the new season.

There's also a lot of unknowns.

Instead of rounding out the edges of the roster like in years past, however, he was forced to pick through a limited goaltending market on a limited budget.

After shipping the underperforming Petr Mrazek and his albatross contract to the Chicago Blackhawks, Murray - a two-time Stanley Cup champion with the Pittsburgh Penguins - was acquired from Ottawa following two miserable campaigns in the nation's capital.

The Senators are picking up 25 per cent of Murray's remaining contract, which leaves Toronto on the hook for just under US$4.7 million each of the next two seasons.

Samsonov, meanwhile, was Washington's starter in the playoffs against the President's Trophy winning Florida Panthers, but wasn't given a qualifying offer by the Capitals and signed a one-year, $1.8-million deal with Toronto.

“Those guys are going to push one another,” Keefe said. “They're both going to challenge for the net.”

The Leafs are certainly hoping that's the case, because after Murray and Samsonov, the next two names on the depth chart are the largely untested Erik Kallgren and Joseph Woll, with the latter still recovering from shoulder surgery.

“Building relationships is the biggest thing ... gaining trust,” said the 28-year-old Murray. “That's been my focus the last little bit.”

He helped the Penguins hoist the Cup in both 2016 and 2017, but after starting to wobble during his last season with Pittsburgh, the Thunder Bay, Ont., native was traded to Ottawa and signed a four-year, $25-million extension.

But a troubling injury history - concussions included - plus an ugly sample size over the last three seasons means there's a level of risk.

The Leafs, who haven't advanced in the playoffs since 2004, and their high-powered attack should have no problem scoring again in 2022-23 with the likes of Auston Matthews, Mitch Marner, John Tavares and William Nylander up front.

“We're excited about both (goalies),” said Tavares, Toronto's captain. “Two guys that have strong pedigrees wanting to come in and bounce back.

What the Leafs are looking for is a goalie - or goalies - able to make the saves he should, and some he shouldn't - something that wasn't the case for long stretches last season.

“These are guys that we expect to make saves to keep us in games and do a job with the lower-danger chances,” Keefe said. “They've both played a lot of good hockey in this league.”

“I don't know how many goalies there are that are playing in the league right now that have won those (big) games and won the Stanley Cup - there's not many,” he said. “We have one here that has that experience and has that ability. It hasn't gone the same way for him in the last few years.

“But we believe the talent is there.”

A low point in Murray's career came last November, when he passed through waivers before being demoted to the American Hockey League.

Instead of complaining, he rebounded with a 5-4-2 record to go along with a .941 save percentage and a shutout in 11 games over a six-week stretch after rejoining the Senators in January before a couple poor outings and a neck injury ended his season in March.

“A lot of lessons,” Murray said of what he took from his time in Ottawa. “Going through adversity is a huge part of growing and getting better. There's a lot to draw on for me.

Samonsov was selected 22nd overall by Washington in 2015 and played in the Russian-based KHL before leaving his homeland for North America in 2018.

Samsonov, who registered just one win in eight playoff appearances, but still had a .907 save percentage and a 2.98 GAA, said he was a surprised to be cut loose by the Capitals.

“But I understand this is just a business,” Samsonov said. “We have a nice opportunity. I'm so excited.”

The netminder added he got the lowdown on playing in hockey's biggest market from a pair of countrymen and former Leafs in Ilya Mikheyev and Ilya Lyubushkin.

“It's a nice organization, nice people,” he said of what he was told, before adding with a smile: “A lot of media here.”

Murray, meanwhile, said developing a good rapport with a crease partner is crucial.

That work is well underway.

“We need to push each other and compete with each other,” he said. “And have each other's backs, as well.

“The only other guy who can really relate to the position that we're in.”

And they're going to go through it - under an intense spotlight - together.