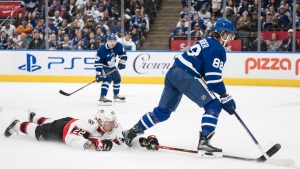 TORONTO - Mark Kastelic scored the winner as the Ottawa Senators stormed back from a 2-0 deficit in the third period to beat the Toronto Maple Leafs 4-2 and take the second game of a split-squad doubleheader that kicked off the NHL's pre-season schedule.

Angus Crookshank, Josh Norris and Tyler Motte, into an empty net, had the other goals for the Senators. Anton Forsberg, Ottawa's projected backup netminder when the regular schedule gets going next month, made 13 saves in just over 30 minutes of play.

Calle Jarnkrok had both goals for Toronto. Ilya Samsonov, in his first appearance since signing with the Leafs in free agency, stopped all 16 shots he faced in two periods of action. Michael Bunting had two assists.

In the earlier game, Justin Holl had a goal and an assist as the Leafs scored on three straight shots in the second period on the way to a 4-1 victory.

Jarnkrok, who inked a four-year contract with Toronto in free agency, opened the scoring early in the second of Game 2 on a bullet shot off a pass from Matthews. He doubled the lead midway through the second on another snipe after Antoine Bibeau replaced Forsberg.

Crookshank cut the lead in half five minutes into third on Keith Petruzzelli, who played the final period for Toronto.

Norris tied the game 2-2 on a power play with under seven left in regulation before Kastelic buried the winner just 22 seconds later and Motte sealed it late after Jarnkrok hit Mads Sogaard's post with under a minute left.

The exhibition schedule's rare curtain-raising twin bill marked the first time the Leafs have played a split-squad doubleheader in the same venue on the same day, while it was the second such instance for the Senators after they met the New York Islanders in St. John's, N.L., in 2014.

Among the benefits for teams is both an extra practice session in a compressed pre-season and the ability for coaches to get eyes on more players in live game action.

But it was also something very different.

“It's strange â€¦ feels like 10 (p.m.) right now,” Toronto head coach Sheldon Keefe, who arrived at Scotiabank Arena before dawn for the 1 p.m. early start, said when he spoke with reporters around 4 p.m. following Game 1. “Haven't seen daylight yet today. But it serves a purpose for me and for us and for our team.

Toronto's post-game media availability after the opener was also the first time reporters have been allowed inside an NHL locker room since the start of the COVID-19 pandemic in March 2020.

“Nice to have you guys back,” Leafs winger Wayne Simmonds said with a grin.

Denis Malgin, who didn't have a point in eight appearances during his first go-around with Toronto in 2019-20, and Alex Steeves had the other goals for the Leafs in Game 1, while Mark Giordano added three assists. Erik Kallgren stopped seven shots in his 40 minutes of work.

Tim Stutzle replied for the Senators. Cam Talbot made 10 saves in just over 1 1/2 periods of action.

Mitch Marner, John Tavares and William Nylander were in the lineup for Game 1. Acquired by the Leafs from the Senators in July, Matt Murray didn't dress for either contest.

Stutzle led Ottawa, while Talbot, Alex DeBrincat and Claude Giroux suited up for the first time since joining the club as part of a busy off-season in the nation's capital.

Jake Sanderson, the fifth overall pick at the 2020 draft, made his professional debut for the Senators.

Ottawa opened the scoring midway through the first when Stutzle took a stretch pass to score on the visitors' only shot of the period.

The No. 3 pick in 2020 skated between DeBrincat and Giroux in their pre-season debuts for Ottawa.

“It's all about chemistry,” Stutzle said. “I'm really happy and glad I can play with them.”

Toronto broke through with a three goals just 2:14 apart in the second.

Holl scored on a shot with Zach Aston-Reese - a veteran forward looking to make the roster on a professional tryout - screening Talbot. Malgin then took a slick feed from Nylander on an odd-man rush before Giordano's point shot deflected in off Steeves for a 3-1 advantage.

So what was the plan for the players who suited up for Game 1 with Game 2 on deck?

“I'm going to go home, hang out with my girls,” Simmonds said.