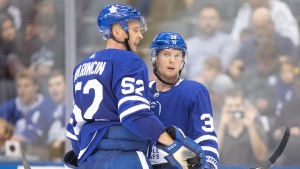 TORONTO - The Toronto Maple Leafs have signed defenceman Martin Marincin to a US$700,000, one-year contract extension.

Marincin, 27, has no points and eight penalty minutes 13 games for the Maple Leafs this season. He has an assist in five games with the American Hockey League's Toronto Marlies.

He has 30 points (four goals, 26 assists) over 214 career regular-season games with Toronto and Edmonton.

Marincin was acquired by the Maple Leafs in a June 27, 2015 trade with the Oilers after being selected by Edmonton in the second round (46th overall) of the 2010 NHL draft.

This report by The Canadian Press was first published Jan. 10, 2020.