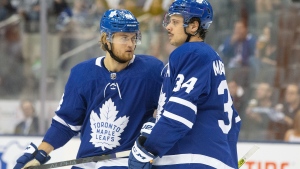 TORONTO - Auston Matthews and Andreas Johnsson each had a goal and an assist, Frederik Andersen stopped all 24 shots he faced in two periods of work, and the Toronto Maple Leafs downed the Buffalo Sabres 3-0 to pick up their first victory of the NHL pre-season Friday.

Matt Read also scored for the home side. Michael Hutchinson made five saves in relief to complete the shutout.

Linus Ullmark started for the Sabres and stopped 21 shots in 40 minutes of action. Andrew Hammond played the third period and made 10 saves.

The Leafs dropped their first two games of the exhibition schedule to the Ottawa Senators - a 3-1 decision in St. John's, N.L., on Tuesday and a 4-3 setback in the nation's capital the following night.

Unlike many Stanley Cup contenders' training camps, there are jobs to be won in Toronto between now and Oct. 2 when the Leafs open the regular season at home against Ottawa. Spots are up for grabs on the fourth line, while the third defence pairing is also an open competition.

Backup goalie, which Hutchinson is vying for with professional tryout candidate Michal Neuvirth, also needs to be filled.

Toronto was second-best for most of the game's first 10 minutes, but grabbed a 1-0 lead at 9:48 of the opening period on the power play. Matthews saw his initial shot blocked before Kenny Agostino whipped a quick backhand from the side of the net that went under Ullmark and right to Johnsson for the tap-in.

Agostino also drew the penalty when he was hooked down by Sabres defenceman William Borgen.

Andersen, who allowed one goal on 13 shots in his pre-season debut Tuesday, robbed Rasmus Asplund at the other end before William Nylander - who's switched from No. 29 to No. 88 this season - fired high on a partial break at the other end.

The first sporting event held at Scotiabank Arena since Game 5 of the NBA Finals back in June, Friday had a decidedly different feel in a matchup where both teams dressed less than half of their projected regular-season rosters.

But the goalies did their best to provide some entertainment with a string of nice saves in the second.

Ullmark stretched to rob Nylander of a sure goal with his skate off a nice feed from Morgan Rielly before Andersen snapped out the glove to deny Jean-Sebastien Dea on a rebound.

Nylander was then stopped on a breakaway, but the Swede deftly set up Matthews for Toronto's second at 12:15 on a pass out of the corner that left Ullmark with no chance.

Looking to resurrect his career with the Sabres after signing in free agency on July 1, former first-round pick Curtis Lazar rang a shot off the post behind Andersen later in the period. Ullmark followed that up with a good stop on Matthews, who was looking for his fourth of the pre-season on another Leafs' power play.

Read, who's also in Toronto on a PTO, made it 3-0 at 9:40 of the final period on a nice toe drag after rookie defenceman Rasmus Sandin poked the puck off a Sabres' stick in the neutral zone to spark the rush.

Casey Mittelstadt had a chance to break the shutout later in the third after stepping around Sandin, but his shot found iron behind Hutchinson.

Buffalo came in 1-1-0 in exhibition action, including a 5-4 overtime victory against Pittsburgh Penguins on Monday and Tuesday's 4-1 loss to the Columbus Blue Jackets.

The Sabres, who open the regular season Oct. 3 in Pittsburgh, and the Leafs meet again Saturday night in Buffalo.