McKinney, Hernandez homer back to back, Blue Jays overpower Rangers 3-0 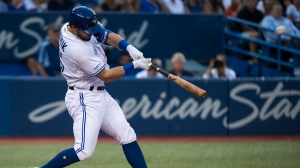 TORONTO - Billy McKinney and Teoscar Hernandez hit back-to-back home runs in the sixth inning and the Toronto Blue Jays kept the Texas Rangers off the board Tuesday in a 3-0 victory.

Danny Santana had a pair of doubles for the Rangers (59-60), supplying the visitors' only two hits through the game's first five innings.

Texas starter Lance Lynn (14-8) gave up one run and four hits with three walks and a strikeout in five innings. It was the first time since April 23 that Lynn had pitched fewer than six innings in a start.

Wilmer Font served as the opener for Toronto, allowing one hit and two walks over his two innings of work.

Giles, making his first appearance since Aug. 7, earned his 16th save of the season.

The Blue Jays made it a 3-0 game in the sixth with the back-to-back solo shots from Hernandez and McKinney off Texas reliever Shawn Kelley.

It was the 11th time this season that Toronto had homered in consecutive at-bats - and second time in as many nights - tying a franchise record from 1999.

Grichuk gave Toronto a 1-0 lead in the second inning with his team-leading 22nd homer of the season, a solo shot to straightaway centre field.

The Blue Jays have hit 106 homers since June 16. They came into the game four back of the Yankees for the most home runs hit in that two-month span.

Rookie sensation Bo Bichette walked in the third inning to extend his on-base streak to 16 games to begin his career, the longest ever by a Blue Jay. The on-base streak is the third longest in MLB history by a player aged 21 or younger, surpassing Ted Williams's 15-game streak from the 1939 season.

Rangers centre-fielder Delino DeShields slammed hard into the wall when he fell backwards while making a catch on a deep Reese McGuire fly ball with two out in the fourth inning. McGuire was batting with the bases loaded and DeShields's catch saved at least a pair of runs. DeShields stayed in the game.

Rougned Odor continued to be booed loudly in each of his plate appearances. Toronto fans have loudly voiced their displeasure for the Texas second baseman since he punched former Blue Jays slugger Jose Bautista in the jaw during a 2016 game.

NOTES: Attendance was 22,958. ... The Blue Jays cap the three-game series with a matinee Wednesday. Right-hander Sean Reid-Foley will start for Toronto while the Rangers counter with lefty Kolby Allard.