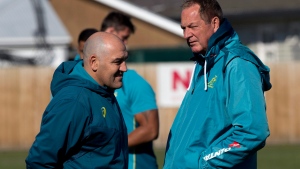 The 62-year-old Australian looks to lead the Canadian women's rugby sevens squad back to the podium in Tokyo. Canada won bronze under John Tait five years ago in Rio.

Byrne took over the Canadian women after Tait stepped down in April in the wake of an independent review of a formal complaint by 37 former and present players under Rugby Canada's harassment and bullying policy. The review said while the conduct described in the players' complaint reflected the experiences of the athletes, it did not fall within the policy's definition of harassment or bullying.

Tait, while saying the complaints were "all unfounded," resigned as sevens head coach and women's high-performance director.

Byrne, who previously served as a consulting coach with Rugby Canada, has helped the women get back on track -- and up their game.

"I've had the fortune to work with him for many years now and I don't think there was another person that could step in at the time that he did," said captain Ghislaine Landry. "He had previous knowledge of the group and the environment. He is arguably one of the best rugby coaches in the world, so we were really fortunate that he was interested an open in coming and working with us.

"I absolutely love it. He's got so much knowledge and I feel like a kid again when I'm on the field and he's teaching us."

Growing up, Byrne played rugby league in the junior ranks for the Manly Warringah Sea Eagles.

"I've just got the wrong build for rugby league really. I just outgrew the game," said Byrne, who stands a little over six foot six. "I got a bit tall and I was a little bit skinny as a teenager."

A little light for rugby union, he switched over to Aussie Rules Football in his second-last year of school and ended up playing the sport for 15 years, winning the title with Hawthorn in 1983.

Byrne was a ruckman. They go after the ball at stoppages, like NBA centres at tip-off only with far more body contact, hoping to get the ball to a teammate to trigger an attack.

He finished his playing career in Sydney, transitioning to coaching in rugby union, league and Aussie Rules.

In 1987, he focused on coaching rugby union and joined the Wallabies the next year. He has served as both a kicking coach and skills coach in two stints with the Australian team. He has also been part of the All Blacks coaching setup and worked with clubs and rugby federations around the world.

"I've been lucky. I've been exposed to three of the top-line professional sports in Australia, which has given me good insights into the rights and the wrong of the games," Byrne said. "Good coaching, bad coaching, indifferent coaching, good players, bad players, indifferent players. It's given me a wide range of expertise to call on when I'm faced with some decisions I need to make."

Byrne knew Mike Chu, Rugby Canada's former GM of rugby operations and high performance, who initially brought him over to work with players and coaches. Chu left Rugby Canada in 2015 to return home and work with New Zealand Rugby.

Byrne also spent time as director of rugby with the Austin Gilgronis in Major League Rugby prior to the pandemic.

He coached former Canadian rugby international Mike Pyke at Edinburgh, telling the six-foot-six wing he was built for Aussie Rules. Pyke went onto play 110 games over seven seasons for the Sydney Swans.

"He became a great player for them," said Byrne.

Byrne's late godfather, meanwhile, played rugby for Canada. Peter Frize represented Canada twice in 1962, against the Barbarians and a Wales under-23 side.

While in Australia, Byrne had the chance to present both Frize and Pyke with their ceremonial Canada caps.

Byrne's family is back in Australia, in their Noosa Bay home, on the Sunshine Coast some 135 kilometres north of Brisbane.

Coming in and out of Australia is strictly controlled during the pandemic, with Byrne twice going through the red tape of applying for travel exemptions.

"My wife or family aren't able to travel under COVID," said Byrne, who has three children and three grandchildren.

"You miss out on stuff for sure … (but) with modern technology I'm not that far away. I'm only a Zoom call away from catchup."

But he says being in Noosa Bay helps when you have to stay at home.

"I'm very biased but I'd say it's one of the best beach areas of Australia. My family's pretty happy for me to do the travel and them to stay there," he said with a chuckle.

The Canadians open play at 9:30 a.m. Thursday (8:30 p.m. ET Wednesday in Canada), facing first Brazil and then Fiji. Day 2 starts with a showdown against France before the quarterfinals.