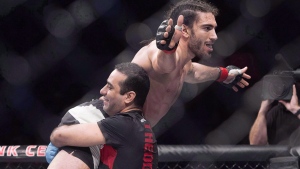 Elias Theodorou from Mississauga, Ont. celebrates his unanimous decision over Cezar Ferreira from Brazil in a middleweight bout at UFC Fight Night in Halifax on February 19, 2017. THE CANADIAN PRESS/Andrew Vaughan

The UFC is returning to Ottawa for a May 4 show at the Canadian Tire Centre.

The main event has yet to be announced but the UFC has already lined up seven Canadians, including 14th-ranked middleweight contender Elias (The Spartan) Theodorou for the televised Fight Night card.

The show marks the mixed martial arts organization's 29th in Canada and second in Ottawa. The first was at the smaller TD Place arena in June 2016, producing the fastest sellout in the venue's history.

American Stephen (Wonderboy) Thompson won a unanimous decision over Canadian Rory (Red King) MacDonald in the main event of the TD Place card. MacDonald, a native of Kelowna, B.C., who trains out of Montreal, has since left the UFC and holds the Bellator welterweight title.

The 30-year-old Theodorou, who is coming off a split-decision win over Eryk Anders at UFC 231 in Toronto in December, has won his last three fights and five of his last six. He is 8-2-0 in the UFC.

Brunson has lost his last two outings -- to quality opposition in Israel (The Last Stylebender) Adesanya and Ronaldo (Jacare) Souza. Adesanya has risen to No. 5 in the world among 185-pound contenders after his recent decision win over former champion Anderson Silva while Souza is No 3.