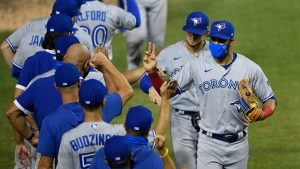 The Toronto Blue Jays will play in Philadelphia this weekend.

Major League Baseball confirmed Wednesday that the Blue Jays will play a double-header at Citizens Bank Park on Saturday, followed by a game on Sunday. The series was originally scheduled to run Friday through Sunday.

The Blue Jays will serve as the home team during the three-game series.

The status of the series was cast in doubt following a novel coronavirus outbreak among the Miami Marlins, who played a season-opening series in Philadelphia last weekend. The Phillies' four-game, home-and-home series against the New York Yankees was postponed this week

Philadelphia general manager Matt Klentak said Wednesday that one employee who works in the visiting clubhouse has tested positive for the coronavirus, but all Phillies players and on-field staff tested negative for COVID-19 for a second straight day.

The Phillies' “road” series with Toronto was switched to Philadelphia because the Blue Jays' temporary ballpark in Buffalo, New York, isn't ready. The Blue Jays have been displaced because the Canadian government didn't want players crossing the border from the United States, where COVID-19 infections have spiked in many states, to play at Toronto's Rogers Centre.