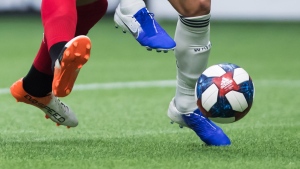 Toronto FC's Terrence Boyd, left, and Vancouver Whitecaps' Scott Sutter vie for the ball during the second half of an MLS soccer game in Vancouver on Friday May 31, 2019. THE CANADIAN PRESS/Darryl Dyck

COVID-19 continues to infiltrate the MLS is Back Tournament bubble with five members of Nashville SC testing positive and another four producing inconclusive tests.

As a result, the league has postponed Nashville's match against Chicago Fire FC, originally planned as one of the Florida tournament's two openers Wednesday.

MLS said it will "continue to evaluate Nashville SC's participation" in the tournament pending the results of additional testing.

The news comes one day after FC Dallas was forced to withdraw from the World Cup-style tournament in the wake of 10 players and a coach testing positive for the virus.

Toronto FC's opening game against D.C. United has been moved to Sunday monring from Friday evening in the wake of TFC's late arrival at the tournament. Toronto was supposed to arrive last Friday but was delayed when additional testing was required in the wake of one member of the travelling party experiencing some symptoms.

All the tests came back negative and the team flew Monday.

Toronto's first game will now be a 9 a.m. ET start rather than 8 p.m. as originally scheduled.

Friday's game between the San Jose Earthquakes and Seattle Sounders will now be played at 9 p.m. ET rather than 10:30 p.m.

The league said two of the Nashville players got their confirmed positive results on the weekend with three more getting the news Monday night, The four others will undergo further tests in the wake of their inconclusive test results.

All 26 teams have now arrived in Orlando with all the players having undergone testing at the league's host hotel.

In addition to the Dallas and Nashville players, one member of Columbus Crew SC has also tested positive.

Testing results from the five clubs that arrived Monday, including Toronto and Vancouver, will be available later Tuesday.

The tournament, at Disney's Wide World of Sports complex in the Orlando area, is slated to run through Aug. 11. It marks the league's first action since the play was halted March 12, two weeks into the season, due to the global pandemic.