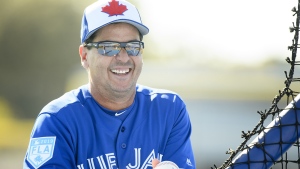 TORONTO - Blue Jays manager Charlie Montoyo knows where he'd like the team to play its home games this season: the friendly confines of Toronto's Rogers Centre.

Montoyo was asked on Saturday about reports that the Blue Jays are investigating playing their home games in Buffalo, N.Y., normally the home of their triple-A affiliate, as a way of navigating ongoing border and quarantine restrictions put in place during the COVID-19 pandemic.

The reports came after two players tweeted that spending all season in quarantine when in Toronto would present significant challenges.

“They're focused on getting ready to play, wherever that is,” said Montoyo. “Of course, we're all hoping it's here. We love this city, we love Toronto, and we're hoping it's going to be here.”

Spring training is being held at Rogers Centre in downtown Toronto, with players having to undergo regular tests for the novel coronavirus. The players are staying at the hotel inside the stadium.

Major League Baseball has released a shortened 60-game schedule that is set to begin in less than two weeks and the Blue Jays are the only team that does not yet have a firm home field. The federal government gave the green light for the Blue Jays to hold training camp in Toronto, but has not made a decision on games.

The Blue Jays open the season July 24 at Tampa Bay. The home opener is July 29 against Washington.

“We're going to have spring training (in Toronto) which is great news for all of us because this is the safest place you can be right now, that's why I'm so happy we're here right now,” said Montoyo.

Several media outlets reported on Friday that Blue Jays players and staff had been warned that if they were caught outside of their bubble on the streets of Toronto during camp that they could face a potential $750,000 fine and potential jail time, which are listed as penalties under the federal government's Quarantine Act.

Infielder Travis Shaw, who signed with the Blue Jays as a free agent in December, tweeted his displeasure at potentially spending an entire summer inside the stadium.

“I wanna make it clear, we're not asking for special treatment,” said Grichuk. “We understand that we need to stay in a 'quarantine bubble.' We wanna make sure everyone is safe. The toughest part is them not allowing our family to come with us. That's what makes it tough for a lot of guys.”

In an email reply, the club confirmed that before arriving in Toronto, players understood the maximum penalties for leaving the Rogers Centre footprint during camp.

Montoyo said he spoke with Shaw earlier Saturday and that the infielder claimed that what he said came out wrong.

First baseman/designated hitter Rowdy Tellez also addressed media on Saturday and he said that where the team plays its home games is not top of mind as the Blue Jays rush to prepare for the season.

“I don't think anybody's really focused on that right now,” said Tellez. “I just think we're focused on being the best team we can be.

This report by The Canadian Press was first published on July 11, 2020.