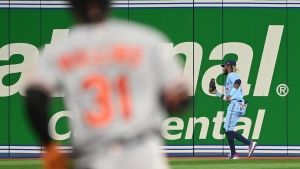 Toronto Blue Jays closer Jordan Romano blew a save opportunity for only the fifth time this season, allowing three ninth-inning runs in a 5-4 loss to the Baltimore Orioles on Sunday.

Solo shots from Danny Jansen and Vladimir Guerrero Jr., combined with a solid showing from starter Alek Manoah, had the home side in front 3-2 and on the verge of a sweep.

But Romano (5-4) loaded the bases after a pair of singles and a walk with none out. Rookie Adley Rutschman then singled to left to score two. Jesus Aguilar knocked in another with a base hit.

Jansen's two-out blast for his 13th round-tripper in 2022 came in the fourth after the Orioles (76-69) tied the game in the top of the inning.

Guerrero hit a towering blast for his 29th in the seventh inning. He already extended his hit streak to 12 games with a fifth-inning double.

An RBI double to centre field from George Springer pulled the Blue Jays to within a run in the ninth, but Bo Bichette grounded out to third to end the game.

In his 98-pitch performance, before 41,311 fans at Rogers Centre, Manoah lasted six innings with four walks and five strikeouts, surrendering a run on four hits for the Blue Jays' seventh sweep this year.

Toronto reliever Adam Cimber gave up a one-out solo homer to left from Aguilar in the eighth inning to close the gap to 3-2.

The Blue Jays snatched a 1-0 lead in the third inning. Orioles starter Dean Kremer hit Springer on the left elbow, the opposite elbow that kept him from earlier this summer's lineup. He advanced to second when Guerrero walked and scored on Bichette's single to centre.

The Blue Jays had Bichette on first and Guerrero on second with none out. The Orioles, however, pulled off a triple play when shortstop Jorge Mateo caught Matt Chapman's line drive and had enough time to get Guerrero and Bichette.

With a day off on Monday, the Blue Jays kept catcher Alejandro Kirk (hip) out for a fifth consecutive game. In addition, Lourdes Gurriel Jr. was eligible to come off the 10-game disabled list but also enjoyed an extra day of rest.

The Blue Jays hit the road for a two-game series against the Philadelphia Phillies beginning Tuesday, followed by a four-game set in Tampa against the Rays. Ross Stripling (8-4) will face Phillies righty Kyle Gibson (10-6) in the opener.

This report by The Canadian Press was first published Sept. 18, 2022.