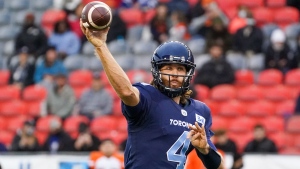 Toronto Argonauts quarterback McLeod Bethel-Thompson (4) throws a pass against the BC Lions during first half CFL action in Toronto on Saturday, Oct. 30, 2021. THE CANADIAN PRESS/Evan Buhler

The first-year running back hauled in McLeod Bethel-Thompson's pass after Antonio Pipkin's one-yard TD run. The score came after B.C.'s Marcus Sayles was flagged for pass interference in the endzone.

B.C. (4-7) suffered a fifth straight loss after kicker Jimmy Camacho missed three field-goal attempts in the fourth quarter. The Lions went to overtime after Camacho's 37-yard boot to win the game instead went for the single on the final play of regulation.

Toronto remained unbeaten at home (5-0), delighting the announced BMO Field gathering of 9,011 on an overcast, cool afternoon. The Argos improved to 5-2 under starter Bethel-Thompson, who was 23-of-37 for just 155 yards with a TD and interception.

Reilly was 20-of-38 passing for three TD passes and an interception.

It was the first of two straight road games in Ontario for the Lions. They'll visit Hamilton next Friday before finishing their regular season hosting Calgary and Edmonton.

Two late Bede field goals staked Toronto to a 16-14 half-time lead. Bede connected from 52 yards out at 14:52 of the second to give the Argos their two-point advantage after hitting a 15-yard boot at 13:39.

Toronto settled for Bede's chip shot following a strong defensive stand from B.C. as the Argos had the ball first and goal from the Lions' four-yard line.

Reilly put B.C. ahead 14-10 with an 18-yard touchdown pass to Rhymes at 8:33 of the second. The Lions were aided by three Toronto penalties for 35 yards on their possession.

This report by The Canadian Press was first published Oct. 30, 2021.