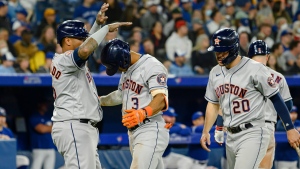 Houston Astros shortstop Jeremy Pena (3) celebrates with teammates after hitting a home run during the sixth inning of MLB baseball action against the Toronto Blue Jays in Toronto on Friday, April 29, 2022. THE CANADIAN PRESS/Christopher Katsarov

TORONTO - Jeremy Pena and Yordan Alvarez both had home runs as part of a five-run sixth inning to lift the Houston Astros to an 11-7 win over the Toronto Blue Jays on Friday.

Starter Jose Urquidy (2-1) allowed four runs on seven hits and a walk but also struck out six in five innings. Bryan Abreu, Phil Maton, Ryne Stanek and Hector Neris came out of the bullpen for the Astros.

Vladimir Guerrero Jr. led the Blue Jays (13-8) with a three-run homer and Matt Chapman's two-run shot kept the home side in the game.

Yusei Kikuchi (0-1) pitched 2 2/3 innings, striking out four but allowing four earned runs on four hits and three walks for a no decision.

Bregman got to Kikuchi early, hitting a 2-2 pitch into the Blue Jays' bullpen. Bregman got special attention from the 35,066 in attendance at Rogers Centre, with the crowd booing his every plate appearance.

Raimel Tapia tied it up for Toronto in the second, with his basehit landing fair and then curving into foul territory for a stand-up double that drove Chapman in from first.

Alvarez restored Houston's lead in the third with his RBI single, cashing in Pena and advancing Bregman to third base. Yuli Gurriel followed that up with a double to left field to score Bregman and in the next at-bat Kyle Tucker's sacrifice fly allowed Alvarez to cross home for a 4-1 lead.

Guerrero tied it up again in the bottom of the inning, launching a Urquidy pitch to deep left field, bringing in Tyler Heineman and George Springer. It was Guerrero's sixth home run of the season.

A sac fly from Chas McCormick scored Martin Maldonado in the fourth inning to make it 5-4 Houston.

Pena piled on in the sixth inning, with a rainbow shot to deep left field, driving in Maldonado and McCormick for an 8-4 Astros lead. Bregman drew a walk in the next at-bat, setting up Alvarez's two-run shot and giving Houston a six-run advantage.

Toronto had three consecutive singles in the bottom of the inning, with Heineman's hit scoring Tapia.

A towering two-run shot by Chapman in the seventh bounced off the third deck's facing at Rogers Centre to cut Houston's lead to 10-7. The impressive feat brought the crowd back to life with chants of “Let's go Blue Jays” echoing through the ballpark as Chapman rounded the bases.

Tucker answered back with an RBI double in the eighth to make it 11-7.

CAPRA DIEM - Infielder Vinny Capra had his contract selected by the Blue Jays from triple-A Buffalo a few hours before Friday's game. Right-handed pitcher Bowden Francis was optioned to Buffalo to make room on the active roster.

BRANTLEY OUT - Left-fielder Michael Brantley was a late scratch from Houston's lineup on Friday. He was placed in health and safety protocols, although the team didn't indicate if he had tested positive for COVID-19, had symptoms, or had a close contact with an active case.

LOOKING AHEAD - Jose Berrios (1-0) is Toronto's scheduled starter for Saturday afternoon's tilt against Houston. Luis Garcia will take the mound for Houston in the 3:07 p.m. start.