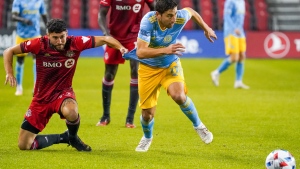 TORONTO - After securing a weekend tie that felt like a win, Toronto FC had to settle for a draw that seemed more like a loss Wednesday.

Digging itself a hole by conceding a goal after just 37 seconds, Toronto rallied with goals in the 66th and 70th minute to set the stage for a comeback victory against the Philadelphia Union before an announced crowd of just 5,026 at BMO Field.

But substitute Sergio Santos took advantage of slack defending to head home a 77th-minute goal that gave the Union a 2-2 tie.

The shoe was on the other foot Saturday when Jozy Altidore scored off a free kick in the 95th minute to earn a 1-1 tie with visiting CF Montreal.

On paper, Wednesday's draw looks like a decent result given Toronto came into the game in 13th place in the Eastern Conference, some 23 points behind second-place Philadelphia (which dropped into third behind Nashville with the tie). But TFC managed to shoot itself in the foot on both goals with dreadful defending, making life difficult for itself - not for the first time this season.

“That's something we've been penalized for,” coach Javier Perez said of the mistakes. “And that's why we have today a draw and not a win.”

An unmarked Santos undid all of Toronto's good work in fighting back, taking advantage of a Kai Wagner cross to beat Quentin Westberg for his sixth goal of the season - and the 62nd conceded by TFC this year. The Brazilian has hurt Toronto before, scoring a hat trick last season against TFC.

Toronto (6-17-9) had pulled even at 1-1 with a fortuitous goal midway through the second half. Centre back Jack Elliott's attempted clearance from within the Philadelphia penalty box hit Toronto midfielder Noble Okello and bounced back towards the Union goal, where Altidore pounced on it and curled a left-footed shot into the goal for his fourth of the season.

Things went from bad to worse four minutes later for Elliott. Attempting to deal with a low cross from Jacob Shaffelburg, the sliding Philadelphia defender, worried about a lurking Altidore, poked the ball into his own goal for a 2-1 Toronto lead.

Toronto fielded a makeshift backline for the second game in a row with Toronto captain Michael Bradley, making his 250th appearance for Toronto in all competitions, starting at centre back in place of the injured Omar Gonzalez.

And it took Philadelphia 37 seconds to breach that defence, with Alejandro Bedoya beating Westberg with a hard, low shot for his third goal of the season. It's debatable whether Toronto had touched the goal before picking it out of its net.

Centre back Jakob Glesnes started the play from the Philadelphia half, floating a long diagonal ball to Wagner whose low cross into the penalty found Daniel Gazdag. Attracting defenders like moths to a flame, the Hungarian international sent the ball over to an unmarked Bedoya who got his shot off before Jonathan Osorio could reach him.

According to the league, it was the Union's second-fastest goal from the start of a game in club history, after C.J. Sapong's strike 20 seconds into a game against D.C. United on July 26, 2015.

Both teams managed 15 shots, without much accuracy. Philadelphia had a 4-3 edge in shots on target while Toronto won the possession battle with 59.8 percent.

As is his want, Perez looked for positives - while offering a disclaimer by saying “Forget the first 30 seconds of the game.”

But then the Spaniard took off his rose-coloured glasses.

“You could tell that we are not used to having the lead in games because we kind of took the foot off the pedal a little bit,” he said.

Toronto had more of the play after the early goal but Philadelphia calmly absorbed the pressure and looked to counterattack. TFC's best chance came in the 37th minute when Shaffelburg turned and fired a shot on target, but his hard shot went straight at Union 'keeper Matt Freese. It was Toronto's lone shot on target in the first half.

Freese stopped Pozuelo from a tight angle at the near post in the 56th minute. Toronto attackers seemed to grow more frustrated as the game wore on.

At the other end, Westberg made a fine close-range save to deny Kacper Przybylko in the 63rd.

Philadelphia (13-8-11) arrived looking to consolidate second place in the Eastern Conference, holding a 23-point edge in the standings over TFC and knowing a win would officially clinch a playoff berth.

Toronto is now winless in four game (0-2-2) with successive ties after being blanked 3-0 by Inter Miami and 2-0 by Atlanta.

Toronto plays at Atlanta on Saturday before hosting Pacific FC on Nov. 3 in the Canadian Championship semifinal. TFC will then wrap up the regular season at home to D.C. United on Nov. 7.

Philadelphia arrived on the back of a 1-0 weekend win over visiting Nashville SC and had lost just once in its last eight games (5-1-2).

Perez made three changes to the starting lineup used on the weekend against Montreal with Altidore, Alejandro Pozuelo and Kemar Lawrence slotting in for Patrick Mullins, Jahkeele Marshall-Rutty and Richie Laryea. A club spokeswoman said Laryea was kept out as a precautionary move after picking up a knock to the knee on the weekend.

The Union were missing star goalkeeper Andre Blake, who has returned to Jamaica in the wake of his grandmother's death. Freese made his 12th career MLS start with former Toronto 'keeper Joe Bendik on the bench.