Powell's consistency, both starting and coming off bench, good sign for Raptors 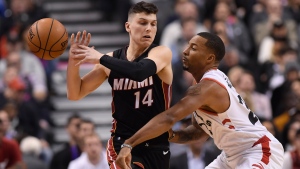 TORONTO - Consistency has been Norman Powell's biggest bugaboo in his four seasons with the Toronto Raptors.

While the Raptors were lamenting Tuesday's overtime loss to the Miami Heat, one bright spot on the night was another solid performance by Powell - his second in less than a week.

“We said something about you can't have a good one every one out of four (games),” said Raptors coach Nick Nurse. “And I said we were trying change that ratio a little bit. It seems like he's been pretty good about three out of four, three out of five maybe.

“You're just trying to keep carving those, the being a total non-factor, get rid of those and try to give us a little something every night and play your really good game three out of four games or three out of five games, like most really good players in the league do.”

Powell had a team-high 23 points in the 121-110 overtime loss, and his two three-pointers in the game's final two minutes of regulation were the reason the Raptors were able to tie it up.

Powell's performance was particularly satisfying because Nurse had moved him back to the bench. Powell had been starting in the absence of point guard Kyle Lowry, who returned Tuesday after missing 11 games with a fractured left thumb.

“I thought we needed a vault-up shooter (Tuesday) night so I went with him and he responded. And I give him credit for that because he went back to the bench,” Nurse said. “I just kind of told him, I said 'Norm, great job filling in, but this is in reality your role, your role is an off the bench guy for this team so let's go kick some butt in this role and start getting used to it.'

“And I was proud of him for doing that. And he was huge. He led the comeback I thought.”

Four nights earlier, Powell exploded for a career-high 33 points in Orlando, scoring 19 of them in the third quarter on a night his teammates were struggling.

Fred VanVleet said the Powell's performance off the bench Tuesday was promising.

“(I see) a guy that is kind of finding his groove again and is sliding back into his confidence,” VanVleet said. “You can see a guy when he's in rhythm and feeling good and (Tuesday) night was very encouraging just because I know how hard it is to go from starting all those games to right back on the bench.”

On the heels of their first loss in eight games, the Raptors (15-5) face another stiff test when they host James Harden and the Houston Rockets (13-7) on Thursday. Harden has scored 110 points over his last two games, including a double-overtime loss to San Antonio on Tuesday.

Will the Raptors make any significant defensive changes in an effort to slow down “The Beard?”

“We've already pretty much played every defence you can think of, or dream of, so it won't be the first time we do anything - other than just James is kind of an alien out there one-on-one,” VanVleet said.

VanVleet said he watches games around the league every night he's not playing, and enjoys watching Houston because of Harden.

“He's a draw to watch, a lot of fun, I try to learn and take stuff from him,” VanVleet said. “Every player dreams of drawing fouls the way he does, and everyone is moving and trying to see how he does it. When you think he can't do any more, he just draws up another game of 50 or 40, or whatever, triple-doubles, and they're winning, so he's special.”

Powell was a Harden fan when he was still in high school and Harden, the 2018 league MVP, was in college at Arizona State.

“I used to watch him all the time. I've always been a fan of his game and just the way he's developed and the player that he is, and the way that he's changing the game, he's amazing to see,” Powell said. “I love watching good basketball and he plays good basketball.”

Tuesday's Rockets game had a bizarre moment in the fourth quarter, when officials erased a Harden slam dunk, ruling the ball didn't clear the cylinder. But referee crew chief James Capers said after the game that “in fact it did clear the net and should have been a successful field goal.”