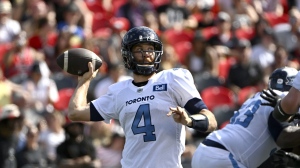 The CFL unveiled the East and West Division all-star squads Wednesday, which were selected by fans, voting members of the Football Reporters of Canada and the league's nine head coaches.

The CFL all-star squad will be named next week.

Winnipeg (15-3) and the Toronto Argonauts (11-7), who finished atop the West and East Divisions, placed 11 and 16 players on their respective divisional squads.

Bethel-Thompson threw for a CFL-high 4,731 yards with 23 touchdowns and 15 interceptions in 17 starts this season. Collaros, a finalist for this year's CFL outstanding player award, was second with 4,183 yards but also had a league-high 37 touchdown passes and won 15-of-17 starts.

Toronto centre Justin Lawrence anchors an offensive like that includes guards Brandon Revenberg of Hamilton and Dariusz Bladek of the Argos along with Double Blue tackles Philip Blake and Dejon Allen.

Hamilton's Jovan Santos-Knox and Toronto's Wynton McManis are the linebackers, with Chris Edwards of the Argos being the cover linebacker.

Toronto's Jamal Peters (CFL-high six interceptions) and Hamilton's Ciante Evans are the cornerbacks with DaShaun Amos of the Argos and Montreal's Najee Murray at halfback. Tunde Adeleke of the Ticats is the safety.

B.C.'s Peter Gobber is at centre and joined by teammate Sukh Chungh at guard. Winnipeg guard Pat Neufeld and tackles Stanley Bryant and Jermarcus Hardrick round out the squad.

Winnipeg's Adam Bighill and Calgary's Cameron Judge are the linebackers with the Bombers' Donald Rutledge being the cover linebacker.

Calgary's Rene Paredes and John Grace are the kicker and punter, respectively. Winnipeg's Janarion Grant is the special-teams player.