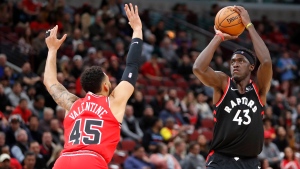 Toronto Raptors forward Pascal Siakam has been named the NBA's Eastern Conference player of the week.

Siakam earned the honour for the second time this season after averaging team highs of 23.5 points and 9.0 rebounds while shooting .473 (35-for-74) from the field as the Raptors picked up four victories to extend their winning streak to seven games.

He posted 18 points and 15 rebounds in a key Eastern Conference victory Wednesday against visiting Philadelphia and finished the week with a team-high 35-point performance Sunday at San Antonio.

A native of Cameroon, Siakam was selected 27th overall in the 2016 NBA draft following two seasons at New Mexico State. He was named the NBA's most improved player last season and the MVP of the 2017 NBA G League Finals with Raptors 905.

Siakam will represent Toronto at the 2020 NBA all-star game next month in Chicago after being selected as a starter for the first time.