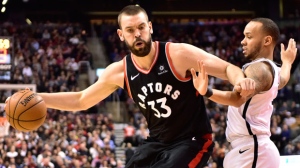 Toronto Raptors centre Marc Gasol has accepted a one-year player option on his contract for the 2019-20 NBA season.

The value is approximately $25.6 million, marking the final year of a five-year contract Gasol signed with the Memphis Grizzlies in 2015.

Had the 34-year-old native of Spain not accepted prior to Thursday's deadline, he would have become a free agent on Sunday.

Raptors star Kawhi Leonard also has a one-year player option on his deal with a deadline for a decision on Saturday, but he is expected to turn it down and become a marquee free agent on Sunday after leading Toronto to its first NBA title this year.

Guard Danny Green is the other Raptors regular slated to become a free agent.

The Raptors acquired Gasol in a deal with the Grizzlies in February.