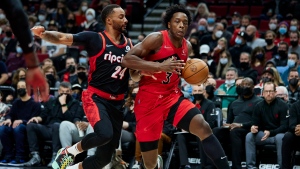 OG Anunoby was playing some of the best basketball of his career when he suffered a hip pointer in practice on Wednesday.

With no timeline set for his return, both he and the Toronto Raptors are understandably frustrated.

“He wants to play. He's obviously disappointed he can't play. He's anxious to know when he can get back, and I'm not sure we know that right now,” Raptors coach Nick Nurse said before his team tipped off Thursday at Utah.

Nurse said Wednesday that Anunoby could be out “a while.”

Khem Birch started in Anunoby's place in Thursday's 119-103 loss to the Jazz. The Raptors (7-8) play again Friday at Sacramento.

Losing Anunoby for a significant chunk of time could be a big blow to the Raptors. He was second in the NBA in minutes played heading into Thursday, averaging 37.3 per game. And already a top defender, Anunoby had been enjoying an offensive breakout in Toronto this season, averaging 20.1 points over the first 15 games of the 2021-22 campaign.

A hip pointer is pain and bruising over the top or front of the hip bone, usually caused by a direct blow to the hip.

“It seems like we've had a minimum of three or four guys out for every game this year,” Nurse said, while acknowledging it happens across the league.

“I looked at the injury report and (the Jazz) didn't seem to have anybody out. It's a little frustrating. What do you do? I'm just more anxious to see us be able to build on some stuff. It seems like we had to take some steps back and reconfigure and then we take some forward. . . It's been like that for most of my career, in and out, people in and out of the lineups. Gosh, I'd love to see the team whole at some point for a little bit.”