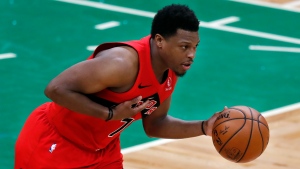 FILE - Toronto Raptors' Kyle Lowry plays against the Boston Celtics during the first half of an NBA basketball game, Thursday, Feb. 11, 2021, in Boston. (AP Photo/Michael Dwyer)

The team on Friday confirmed a sign-and-trade deal that sent the star guard to the Miami Heat, ending his nine-year run in Toronto.

The 35-year-old six-time all-star guard announced his departure to Miami in a tweet Monday, but NBA teams were not allowed to confirm roster moves until Friday.

Dragic is a 13-year NBA veteran who holds career averages of 13.9 points, 4.8 assists and 3.1 rebounds. The 35-year-old Slovenian has also played for Houston and Phoenix.

Raptors general manager Bobby Webster said he's spoken with Achiuwa and Dragic and both are “very excited” about coming to Toronto.

Still, Webster admitted it was tough to move on from Lowry.

“I think emotionally, obviously, there's a ton of good feelings and affection and all of those things,” he said.

Lowry said he had several “great conversations” about his future with Raptors president and vice-chairman Masai Ujiri last season and both were very open about their intentions.

“They have some great core pieces. And I spoke about it - they're in great hands,” he said.

VanVleet in particular took on more of leadership role last season, he added.

Heading into free agency, Lowry entertained a number of options and said his move to Miami was influenced by Heat star Jimmy Butler.

The pair are longtime friends and Lowry is even the godfather to Butler's daughter, Rylee.

“He was really on me about coming to the Heat and kind of fulfilling some things that we've talked about before and trying to possibly play together,” Lowry said. “Now that the opportunity is here, I'm looking forward to the opportunity.”

Lowry, who hails from Philadelphia, has averaged 14.9 points, 6.2 assists and 4.4 rebounds in 960 NBA games. Over his 15-year career, he's played for Toronto, Houston and Memphis, and currently ranks fifth in assists among active players on the NBA's all-time list.

It's a lineup Lowry's eager to join. He knows, though, that the group must work hard in order to return the Heat to its former glory.

“On paper it looks great, but we've got to put in the work on the floor,” he said. “It looks good, but you've got to find a way to put it together. You don't put it together, then it don't mean jack, right?”

This report by The Canadian Press was first published Aug. 6, 2021