Raptors continue to cash in on championship, ranking fourth on NBA merchandise list 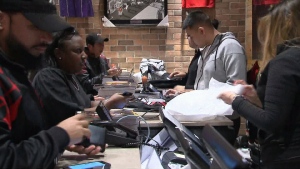 The Raptors made the top five of the list for the first time, likely boosted by merchandise commemorating their run to the title.

The Toronto Raptors are continuing to cash in on their championship season.

The Raptors were the fourth most popular team on the merchandise sales list released Friday by the NBA and the NBA Players Association.

The results are based on NBAStore.com sales from October through December.

The Los Angeles Lakers topped the list, followed by Boston, Philadelphia and Toronto.

Milwaukee was fifth, and the Golden State Warriors, who the Raptors beat in the 2019 NBA Finals, were sixth.

The Raptors made the top five of the list for the first time, likely boosted by merchandise commemorating their run to the title.

New Orleans rookie Zion Williamson rounded out the top 15 despite not having played an NBA game. The 2019 first-overall draft pick out of Duke is scheduled to make his season debut Wednesday after he underwent surgery to repair a torn meniscus in his right knee the day before the Pelicans opened the season at Toronto.