Raptors fly back to Oakland, ready to bounce back after Game 5 loss 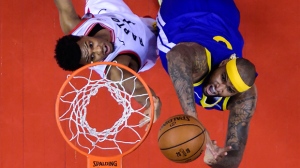 TORONTO -- Raptors championship hats and T-shirts sat stacked in bins at Scotiabank Arena, ready to be distributed to players on Monday night.

They've gone back into storage, a cruel twist of the knife on what was already an awful Game 5 of the NBA Finals at Scotiabank Arena.

Celebratory plans were hastily shoved to the back-burner when the Golden State Warriors rallied around their seriously injured superstar Kevin Durant to edge the Raptors 106-105.

The Raptors flew back to Oakland, Calif., on Tuesday, their series lead shaved to 3-2 after a poor performance that saw them allow a franchise-worst 20 three-point shots.

But if there's one thing Toronto has proven in its historic post-season run, it's that it can bounce back from bad nights.

“Yeah, we had a chance to win a championship tonight and we didn't do it,” guard Fred VanVleet said in a sombre post-game locker room. “We didn't play well enough. We didn't execute enough down the stretch and that stings a little bit, but there's a lot more basketball left to play.

“We came into this series expecting a long series and we put ourselves in a good position.”

Raptors fans might not have been expecting a long series. Hundreds of thousands of them gathered at viewing parties, in bars, and even at Regina's 33,350-seat Mosaic Stadium, normally home to the Saskatchewan Roughriders, to witness what they hoped was history unfold.

No Canadian team in any of the fourth major North American leagues - NBA, NHL, NFL and MLB - has won a title since the 1993 Toronto Blue Jays.

Statistics were in Toronto's favour. Teams that go up 3-1 in a series have gone on to win 97 per cent of the time.

The Raptors couldn't close it out on Monday however. Trailing by as many as 14 points in the third quarter, a 12-2 run put them up by six with 3:28 to play. Coach Nick Nurse then called a timeout that had irate fans raging on Twitter. Klay Thompson and Stephen Curry combined for three consecutive three-pointers after the timeout.

“Just decided to give those guys a rest, and we had back-to-back (timeouts) there that we would have lost them under the three-minute mark, and just thought we could use the extra energy push,” Nurse said.

The rookie head coach is confident in his team's ability to bounce back. They trailed Milwaukee 2-0 before winning the series in six games, becoming one of six teams in NBA history to rally from such a deficit in the conference finals.

“I expect this one to be a long series,” Nurse said. “I'm not sitting here trying to think we should be this, be that. But if you would have told me at the start of this thing if we could fast forward to a 3-2 lead, you want to take it? I would probably say yes.”

Monday's game had an eerie feeling about it. Neither team celebrated the victory. Toronto lamented the loss, while the Warriors rued the loss of their star Durant, who went down with an achilles tendon injury early in the second quarter. The 10-time all-star had sat out the first four games in the series with a calf injury.

Warriors GM Bob Myers battled back tears as he addressed the media about Durant's injury after the game.

The back page of the New York Post was a photo of Durant sitting in a heap with the headline “Knicks Lose Game 5” - New York has been tied to Durant in their anticipated pursuit of him in next month's free agency.

It was the reaction of some fans though that cast a big shadow on the night, and was still being hotly debated on Twitter on Tuesday. Many fans initially cheered as Durant fell. Many of them waved goodbye. Kyle Lowry, Serge Ibaka and Danny Green waved their arms to quiet the crowd, which switched to chants of “K-D!” and applauded Durant as he was helped to the locker room.

But the damage was done.

Drake, who's taken verbal shots at opponents throughout the post-season, was distraught after Durant went down, grabbing his head in his hands in disbelief.

The Toronto rapper posted on Instagram shortly after the game saying: “Was tough for any of us to even enjoy that game tonight after seeing this transpire. Prayer for our brother. That's my only concern tonight is your well-being. 'The game needs me' is an understatement when it comes to 35. Please wish the best for this true warrior.”

The Warriors said they would play the rest of the Finals for Durant.

“We'll be suiting up in front of Oracle Arena with the amazing atmosphere and opportunity to play for him, and to kind of honour the sacrifice in terms of putting his body on the line tonight,” guard Stephen Curry said.

Thursday is the final NBA game at storied Oracle Arena. The team is moving to Chase Center in San Francisco next season.

It also marks the most expensive game at the old venue on record. According to secondary ticket marketplace TickPick, the average purchase price Tuesday morning was about US$1,170.

Still, they're nearly half the cost of a potential Game 7 back in Toronto. Average purchase price for Toronto tickets were US$2,013.