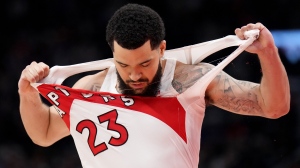 Toronto Raptors guard Fred VanVleet (23) rips of his jersey as he walks off the floor during first half NBA first round playoff action against the Philadelphia 76ers in Toronto, Saturday, April 23, 2022. THE CANADIAN PRESS/Nathan Denette

VanVleet played less than 15 minutes of Toronto's 110-102 win over Philly on Saturday, limping off the court and ripping his jersey in frustration.

The Raptors face elimination again Monday, trailing the Sixers 3-1 in their best-of-seven opening-round playoff series. No team in NBA history has come back from being down 3-0 - as the Raptors were - to win a series.

The 28-year-old VanVleet had been hampered by a bruised knee this season, missing 14 games since Jan. 25.

He averaged 20.3 points, 6.7 assists, and 4.4 rebounds per game this season and was named an all-star for the first time.

This report by The Canadian Press was first published April 24, 2022.