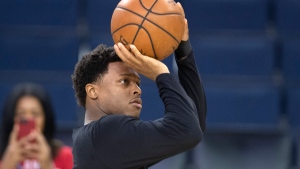 Toronto Raptors' Kyle Lowry makes a shot at practice for the NBA Finals in Oakland on Wednesday June 12, 2019. Lowry says his surgically repaired thumb has not recovered sufficiently enough to allow him to participate with USA Basketball. (THE CANADIAN PRESS/Frank Gunn)

Kyle Lowry of the NBA champion Toronto Raptors says his surgically repaired thumb has not recovered sufficiently enough to allow him to participate with USA Basketball in camp for the FIBA World Cup, and is withdrawing from consideration for the team.

Lowry made the announcement Monday after meeting with his surgeon to gauge the recovery of his thumb, which was operated on last month. He was hoping to be on the court with the Americans this week when they resume practice in Southern California.

Lowry's decision means there are 15 players in the running for 12 spots on the final roster.

Lowry says he loves “playing for USAB but I have to sit this one out and support the team from home.”