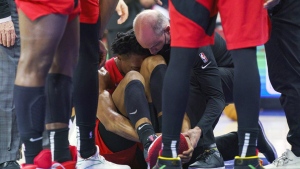 TORONTO - Raptors rookie Scottie Barnes could be close to a return, but it won't be for Game 3 of Toronto's series with Philadelphia.

Nick Nurse had said Barnes was a “maybe” to play Wednesday against the 76ers after he'd participated in the morning shootaround, but told reporters in his pre-game availability that the 20-year-old wasn't ready to go.

“He's pretty good,” Nurse said. “He's been able to do some things, but not to the level of letting him go tonight. Still very encouraging. I would certainly assume he'll be ready for the next one (Game 4 on Saturday).”

Barnes, a finalist for the NBA rookie of the year award, walked by reporters without a walking boot or a noticeable limp on Wednesday morning.

A return by Barnes would have been a huge boost for a Raptors squad trailing 2-0 in their first-round playoff series against the 76ers. Barnes, who averaged 15.3 points, 7.5 rebounds and 3.5 assists a game in the regular season, can play virtually every position.

The Raptors did get some good news earlier Wednesday when Nurse said that Gary Trent Jr., who has been battling a non-COVID-19 illness, and Thaddeus Young (hyperextended left thumb) would play.

Barnes was on pace for a triple double, with 15 points, 10 rebounds and eight assists, in Toronto's 131-111 loss in Game 1 when Sixers centre Joel Embiid stepped on his ankle, sending him crashing to the floor in agony with about nine minutes to play.

“It would do a lot,” VanVleet said about having Barnes back. “He has been one of our better players this year. He's obviously in our starting five. He brings a lot to the table with his size and his IQ and just the way he plays. He can break a defence down. Defensively he can switch and guard and rebound.

“We've just got to let him heal up,” VanVleet added. “Don't want to put the pressure on him, feeling like he has to rush back. So whenever he is ready, we'll take him back for sure.”

The ailing Trent averaged 18 points against Philadelphia in the regular season, but struggled in Game 2. He had four fouls with zero points over nine minutes before calling it a night.

“He looks and feels to me much improved than he did the last couple of games,” Nurse said.

This report by The Canadian Press was first published April 20, 2022.