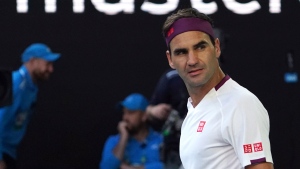 BASEL, Switzerland -- Roger Federer has had surgery on his right knee and will miss the French Open and several other tournaments.

Writing on his Facebook page Thursday, the 20-time Grand Slam champion said his knee "has been bothering me for a little while" so he "decided to have arthroscopic surgery in Switzerland yesterday (Wednesday)."

Doctors "are very confident of a full recovery," Federer said, before ending his post by telling his fans "see you on the grass!" as he targets a return for Wimbledon.

Federer will skip tournaments in Dubai, Indian Wells, Bogota and Miami prior to the French Open, which starts on May 24.

Federer could potentially return to play at one of his favourite tournaments in Halle, Germany, on June 15. He has was won the grass-court tournament 10 times.

Federer struggled with his fitness at times during the recent Australian Open, and was clearly hampered when he lost to Djokovic in straight sets in the semifinals after making a strong start.