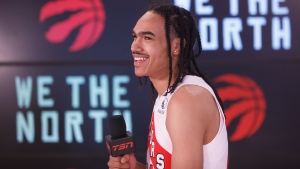 TORONTO - It's the dream of every aspiring young basketball player to be drafted by their hometown team, according to Dalano Banton.

And his dream was no different.

Banton made history this summer as the first Torontonian -- and first Canadian -- drafted by the Raptors when they selected him with their 46th pick, a night the 21-year-old rookie said was like double the pleasure.

“It's just been a dream come true just to wake up and come to the Raptors facility. . . being drafted is definitely a blessing, but (to be drafted) by where you're from is definitely like two dreams coming true at once.

“Everybody has been so welcoming and seeing people and them recognizing who I am . . . it's just everybody embracing me and being able to show out for the city has been a blessing.”

Playing in his hometown can come with extra demands, but Banton said his friends and family -- including a solid support team of his parents, grandmother and uncles -- have given him space while he adjusts to life as a professional basketball player.

“They understand just not having the access to me, just to be able to stay focused, coming into the gym two to three times a day, I don't have time to hang out and do all the other stuff that people might want to do,” Banton said after Day 2 of camp at OVO Athletic Centre. “Everybody understands the situation that I'm in . . . . They know I've been focused on just grinding and am focused on the future and what the future holds for me.

Banton grew up in Mount Olive, an area inside the hardscrabble Rexdale neighbourhood which sits northwest of downtown Toronto and was also home to hockey star P.K. Subban.

His basketball dreams sprouted both on a Mount Olive parking lot court and the nearby North Kipling Community Centre and Rexdale Community Hub, which conveniently operated at staggered times.

“They kind of worked together to keep kids indoors and playing sports,” Banton said. “That was where I built the dream of becoming an NBA player, for sure.”

Banton will wear No. 45 as a nod to the Kipling 45 bus, a transit fixture in that area of town. He said he was blessed to have the neighbourhood community centres, which provided a safety net and a space to dream.

“Growing up and feeling like the dream of being an NBA player was far-fetched, just seeing guys that play for the Raptors come to your neighbourhood, your area, and show love and give back was definitely a blessing and something I look forward to doing,” he said.

As the lone Torontonian on the Raptors, Banton has played tour guide for some of his new teammates.

“Knowing the good food spots away from downtown, little spots, little cultural restaurants that I give these guys references to so they can go to, some of them went already and they loved it,” he said.

Banton, who played at Western Kentucky and Nebraska in the NCAA, was touted pre-draft for his court vision and pick-and-roll passing.

A couple of Banton's immediate challenges in camp, he said, are putting some weight on his six-foot-nine, 204-pound frame. He also need to works on his shooting -- he's among the Raptors who attend extra nightly shooting practices.

“He's good, he's improved a lot since we first saw him join us,” Nurse said. “Another guy who is in the shooting program and it's paying off, his numbers are going way up, he's made some good adjustments.

“We've got him trying to play at a faster pace and it's really helping him. He's really a point guard, he brings the ball and has good vision, we're trying to get him to get into the paint as quick as he can and he can see everybody out there so that's good.

“Interesting because at the other end he blocks shots and rebounds like a 6-9 guy would,” he added.

Banton could spend a lot of time in the team's G League affiliate Raptors 905, simply to make sure he's got the ball in his hands somewhere, Nurse said, adding the same goes for sophomore guard Malachi Flynn.

With the G League operating a shortened season in a bubble in Florida, Flynn didn't have the same opportunity in the developmental league that benefited players such as Fred VanVleet and Pascal Siakam. They were able to get their NBA feet wet with the 905s a short drive away in Mississauga, Ont., while still practising with and playing games for the Raptors.

The Raptors open the pre-season Monday against the visiting Philadelphia 76ers, Toronto's first game at Scotiabank Arena since Feb. 28, 2020.