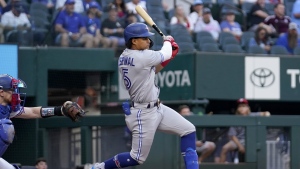 Toronto Blue Jays' Santiago Espinal (5) follows through on a two-RBI single as Texas Rangers catcher Sam Huff, left, looks on in the first inning of baseball game in Arlington, Texas, Saturday, Sept. 10, 2022. Espinal is back in the Toronto Blue Jays' lineup for Game 2 of the American League wild card series. THE CANADIAN PRESS/AP-Tony Gutierrez

Santiago Espinal is back in the Toronto Blue Jays' lineup.

The second baseman will bat ninth against the Seattle Mariners on Saturday in Game 2 of the American League wild card series.

"He took a lot of swings, swing and miss, all that kind of stuff with that kind of injury," said Schneider. "I trust that he's good to go. Running, defence, everything was 100 per cent, so I liked him for today."

Espinal was placed on the 10-day IL on Sept. 21 with Whit Merrifield stepping up at second base in the interim.

Merrifield was moved to left field with Espinal's return and will hit eighth against the Mariners.

Espinal is hitting .267 this season with seven home runs and 51 runs batted in. Merrifield has a .250 average this season split between the Kansas City Royals and the Blue Jays with 11 homers and 58 RBIs.

Toronto lost Game 1 of the best-of-three series 4-0 on Friday. Kevin Gausman will be the starting pitcher for the Blue Jays with Robbie Ray going for Seattle.

This report by The Canadian Press was first published Oct. 8, 2022.