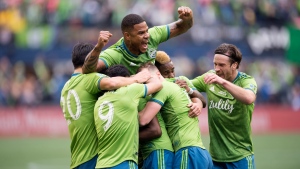 It was an opportunistic performance for the Sounders, who lived off scraps but got the goal they needed and then came on strong. Toronto's consolation goal came in stoppage time.

The game was a championship rubber match with Seattle winning the 2016 final via penalty shootout (5-4) and Toronto lifting the trophy with a 2-0 victory in 2017.

While Toronto dominated possession for most of the game Sunday, it looked vulnerable to the counter-attack. The visitors kept up the pressure to open the second half with Alejandro Pozuelo dancing around defenders with the ball on a string. But he lacked help up front, with Jozy Altidore on the bench.

The Seattle breakthrough came in the 57th minute when Ruidiaz found Leerdam in the penalty box. Leerdam lost Nicolas Benezet and his shot, through the legs of Chris Mavinga, deflected in off Justin Morrow for the Dutch fullback's first playoff goal.

It was Seattle's first MLS Cup goal from open play in 267 minutes - and another unhappy championship game memory for Morrow. The Toronto fullback hammered his spot kick off the crossbar in the penalty shootout loss in the 2016 Cup final.

Rodriguez, who had come on the field 15 minutes earlier, then capped off a nifty passing sequence with Nicolas Lodeiro and Gustav Svensson with a wonderful shot from the edge of the penalty box that eluded goalkeeper Quentin Westberg in the 76th minute. Svensson started the play by winning the ball back in the Toronto end.

The sellout crowd of 69,274 at CenturyLink Field, a record for a sporting event at the stadium, erupted as the Sounders celebrated en masse by the corner flag.

With Toronto throwing everything forward in search of a goal, Ruidiaz outmuscled Mavinga to the ball and scored in the 90th minute to complete the victory. It was his fourth of the playoffs.

The Peruvian wheeled away and whipped off his jersey, swinging it around his head in joy. He got a yellow card for the show and then was subbed off to a standing ovation.

Altidore, with an assist from Pozuelo, scored on a header in the 93rd minute after coming on as a late substitute.

Coach Greg Vanney, wearing his lucky playoff scarf, returned centre back Omar Gonzalez (hamstring) to the starting 11 with Laurent Ciman reverting to the substitutes. Altidore, who had not played since the Oct. 6 regular-season finale due to a quad strain, started on the bench.

Altidore came on in the 68th minute. But it was the Sounders who came on late, spurred on by their goal.

Gonzalez, like Ciman a former MLS defender of the year, missed the first playoff game, dressing but not seeing action for the next two. The changes meant defender Drew Moor dropped out of the game-day 18.

Seattle opted for veteran Panamanian Roman Torres over Xavier Arreaga at centre back.

CenturyLink Field was loud and dressed almost exclusively in green, save for a pocket of red Toronto FC supporters high up in the north end of the east stand.

Toronto had 65.1 per cent of the possession in a scrappy but entertaining first half, with Seattle defending hard and looking for the counter-attack. Despite not having much of the ball, the Sounders collected eight corners to Toronto's two in the first 45 minutes.

Gonzalez sent an early message by bundling Ruidiaz, Seattle's danger man, to the ground from behind in the fifth minute.

While Toronto had more of the ball early, it lived dangerously with a few giveaways. Seattle showed its counter-attack threat with Jordan Morris, taking advantage of a poor Toronto pass, made a marauding run down the length of the field with Westberg comfortably handling his shot in the ninth minute.

Torres came close in the 22nd minute but his shot off a corner flew high. The corner came after a poor pass from Benezet resulted in a deflected Sounders shot.

Seattle 'keeper Stefan Frei had to deal with some friendly fire, racing to handle an over-enthusiastic backpass from a teammate. Frei then had to make a fine one-handed diving save off Benezet in the 36th minute.

Westberg came up big in the 45th minute, stopping a dangerous Ruidiaz shot. Cristian Roldan found Lodeiro whose curling ball found Ruidiaz behind Gonzalez. The slight Peruvian accelerated past Gonzalez but Westberg blocked the shot with his legs.

A subplot Sunday was Toronto captain Michael Bradley's contract. The 32-year-old, who joined Toronto in 2104 from AS Roma, is out of contract at the end of the year. But both he and the club declined comment on a report that a win Sunday would trigger another year at his current salary of US$6.5 million (second-highest in the league this season).

Toronto, seeded fourth in the East, made it to the final the hard way with road wins over No. 1 New York City FC and No. 2 Atlanta United FC after dispatching No. 5 D.C. United at BMO Field.

Seattle, seeded second in the West, downed No. 7 FC Dallas and No. 3 Real Salt Lake before upsetting No. 1 Los Angeles FC on the road.

Attendance Sunday was second only to the 73,019 that attended last year's final at Atlanta's Mercedes-Benz Stadium. The finals in Toronto drew 36,045 and 30,584, respectively.

From the highs to the lows, you’ve been at our side. Thank you to the best fans in MLS. pic.twitter.com/J4fvBcsCzU